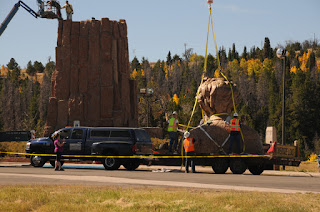 Once the pedestal was ready for Lincoln,the next step was for the crane operators to secure straps around him.  I hadn't expected them to go around his neck, but as you can see, that's exactly where they were positioned.  And then it was time to go airborne. 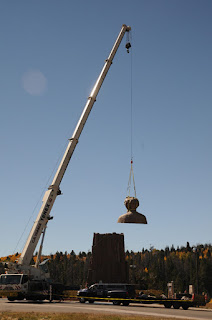 You've heard of picture perfect weather.  That's what we had that day. 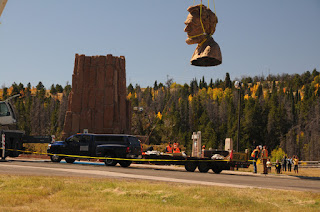 To my surprise, there was a lot of work -- hours worth -- after the bust was finally in place on the pedestal. 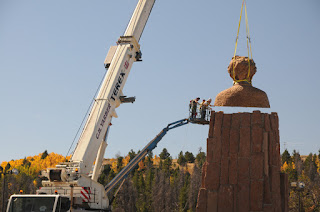 The same crew that had prepared the pedestal had to get it into exactly the right place, then secure it to the base. 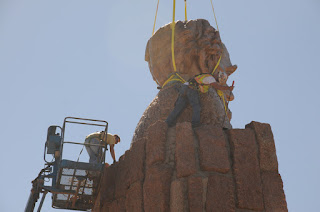 Although that's not what's happening, this picture looks almost as if one of the workmen was trying to straighten Lincoln's tie. 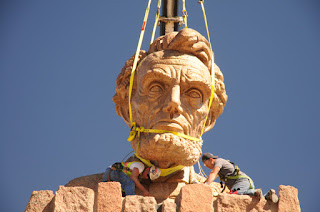 Even after the straps were removed and the crane was able to leave, work continued, securing the monument to its base.  But eventually everything was completed, and the newly restored Lincoln monument was ready to greet travelers for many more years. 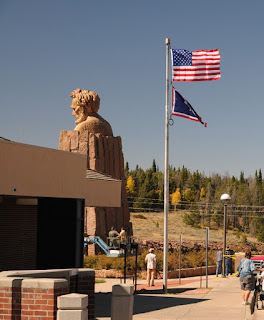 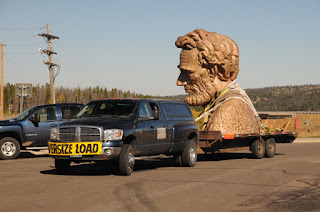 Once the monument was sandblasted and sealed, it was time to truck it back to the summit of I-80.  Can you imagine the looks Lincoln must have gotten as he was transported down the highway?  But look at how clean he is compared to two weeks earlier. 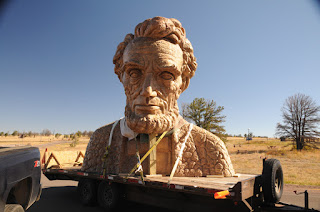 You might think that the next step was to place the bust back on the pedestal, but there was work to be done before that.  A crew had to prepare the pedestal.  Believe it or not, that was a multi-hour project. 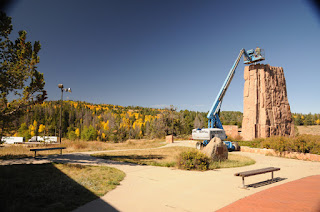 Next the crane had to be positioned.  And then ... 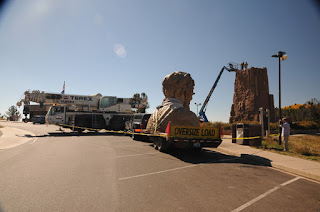 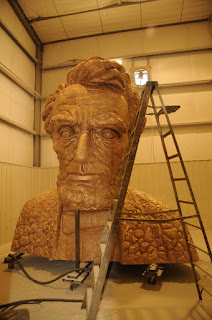 Remember how dark the Lincoln monument was prior to its restoration?  Here it is inside the monument building at Eagle Bronze with the sandblasting almost finished.  Actually, sandblasting is a misnomer.  Instead of sand, special glass pellets were used to remove the oxidation from the statue.

Once that was finished, several coats of sealer were applied, followed by a special coating to protect it from UV rays.

And, yes, his bowtie is crooked.  Apparently many representations of Abraham Lincoln, including the engraving on the five dollar bill, show him with a crooked tie, so Robert Isaiah Russin, the artist chosen to create this statue, continued the tradition. 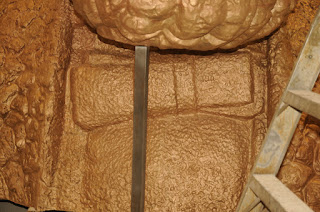 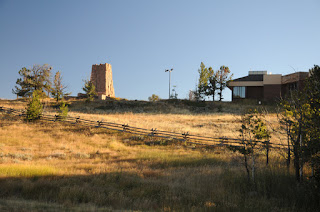 Many travelers on Interstate 80 in Wyoming look forward to the road's summit just east of Laramie and the view of the Lincoln monument, so you can imagine how disappointed they were for a two-week period when the pedestal was empty.  Staff at the visitors' center said they had as many as forty inquiries a day about the missing statue.

Why was Lincoln gone? 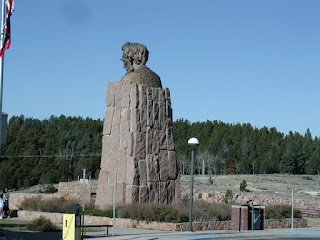 If you look at this picture taken several years before the restoration, you'll see that the statue is almost black.  That's the result of more than twenty years of oxidation and pollution.  WYDOT knew the deteroriation couldn't be allowed to continue, and so they contracted with Eagle Bronze in Lander to restore it to its original beauty.

Here's another view of the pre-restoration statue. 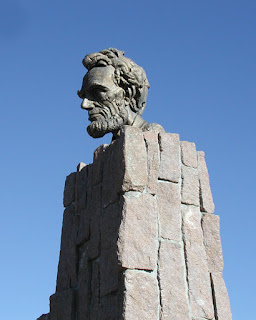