Words for Writers - To Thine Own Self Be True

You’re probably asking, why on earth is this woman quoting Shakespeare? What does Hamlet have to do with being a writer? The truth is, I was going to call this post “In Defense of the Semi-Colon,” but I knew no one – and I mean no one – would read that, so I chose a title that I thought would get you to skim at least the first paragraph. As for those semi-colons … well, you’ll just have to keep reading to see where they fit into the plot.

Call me eccentric, if you will, but I believe Shakespeare’s advice has relevance to us as writers. Why? Because I believe most of us will be tempted to ignore it at least once in our careers, and we may regret that.

In some cases, disregarding the bard’s counsel is the result of not having fully defined “thine own self.”  So, let’s start with that. I propose a few minutes of introspection to answer three questions:

3. What is important to me? (or, to paraphrase that, What do I value?)

We all have different answers, and they’re all valid. I’ll give you my answers because – no surprise – they have a bearing on the issue of semi-colons.

Who am I? I’m a Christian writer. Though there are other facets to my life, my faith and the need to write are central. That’s how I define myself.

Why do I write? To entertain readers and to introduce them to my world view. (My world view, by the way, is one in which love heals and justice prevails.)

What do I value? Besides justice and integrity, perfect grammar. I doubt any one of you will add grammar to your list of values, but it’s important to me. And that’s where the semi-colons come into play.

In Defense of the Semi-Colon

More than ten years ago when I was still writing for the secular market I started working with a fledgling publisher. They were interested in one of my early romances to which I’d received reversion of rights, and – since that book was the first in a series that is still in print – I thought that having it reissued would be a good marketing move. It was, I believed, the classic win-win situation. The publisher would get a book that required no editing, and I’d be able to introduce some of my newer readers to that particular story.

Unfortunately, the publisher had what they called a ‘house style’ for text, and that style dictated the abolishment of both colons and semi-colons. I could live with the substitution of em-dashes for colons, since that didn’t change the meaning of the sentence, but turning all semi-colons into commas just didn’t work for me. As you can tell from reading this, I write sentences with multiple clauses, and there are times when a semi-colon is mandatory to maintain the meaning.

After a week or so of discussions with the editor, I pulled the book. Why? Because grammar is important to me, and the changes she wanted made would have turned my manuscript into one that would make me cringe. In other words, I would not have been true to myself if I’d agreed to eliminate semi-colons.

This may sound trivial; it may sound extreme. (Notice the semi-colon in the previous sentence.)  I doubt anyone else on the planet would refuse a contract for that reason.

But what if the editor asked you to change the basic premise of the book, turning your heroine into a character you didn’t like?

What if an editor wanted you to change the setting and timeframe to one that was more popular but which didn’t appeal to you?

Or what if being published meant signing a contract with a company that had a reputation for being less than honest?

Would you do it?

The point I’m trying to make is that we all want to be published, and once we’re published, we want to continue to see our books in print. That’s part of being a writer. But, in my opinion, we should never compromise our principles simply to be published.

Think about that and your answers to the three questions each time you consider signing a publishing contract. The bottom line is, it’s your book; it’s your name that will be on the cover; it’s your decision. I urge you, though, whatever decision you make, to remember Shakespeare. 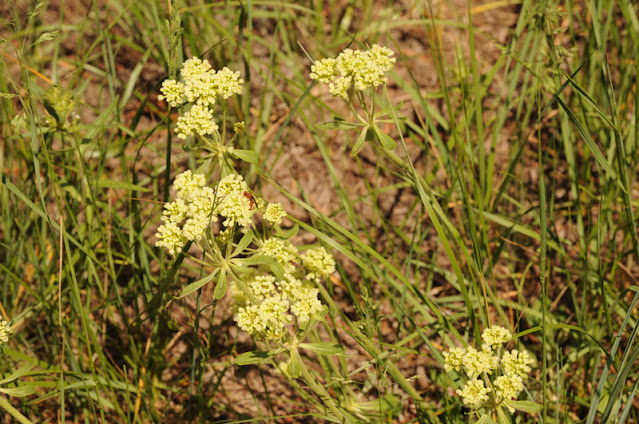 One of the attractions of summer in Wyoming is the abundance of wildflowers it brings. But more than flowers flourish during this short season. If you look closely, you'll see that a brilliantly colored insect is searching for nectar on one of the flowers.
Posted by Amanda Cabot at 4:00 AM No comments:

* “If you want to be successful, you need to get up early every morning and write for at least an hour without interruptions.”

* “The best time to write is late at night when the kids are in bed and there’s nothing exciting to watch on TV.”

* “The only way to write a book is to have a detailed outline before you begin. You need to know what scenes will be in every chapter, whose POV each scene will have, and make sure that every plot point is outlined.”

* “Outlining a book before you write destroys creativity. The best way to write is to simply sit at the computer and let the ideas flow.”

If you’re like me, you’ve heard this kind of conflicting advice, whether presented in a workshop at a writer’s conference, posted in a blog or simply expressed as part of a casual conversation among writers. Again, if you’re like me, you’ve gone home shaking your head, trying to figure out which one of the statements is correct. You may even have despaired of ever being a successful writer, since you don’t do any of the things you were told were essential.

What’s a writer to do? I propose a three-step program. Ready? Let’s go.

Step One:  Take a deep breath. If you’re a chocoholic, have a piece of chocolate. If you’re a jogger, this is the time for a nice long run. If movies are your favorite way to forget about the world, watch one. In other words, relax.

Step Two:  Repeat after me, “I am a writer. I am unique. What works for someone else may not work for me.” Relinquish the guilt and sense of failure that no matter how many times you tried, getting up at 4 AM to write only makes you tired and cranky, not creative, and that even though you would like to let ideas flow as Mega-Selling Author advised, that doesn’t work for you.

I know I’m making this sound simple, when the reality is that it isn’t, but it’s an essential step. Even though you want to have Mega-Selling Author’s success, it’s important to remember that you’re not twins. What works for Mega-Selling may or may not work for you. And that leads us to the final step.

Step Three:  Find your writing rhythm. There are several aspects to this. The first is determining the time of day and days of the week when you’re most productive. You don’t need to be a scientist to do this. Simply observe yourself over the period of a couple weeks, noting when you feel most energized and writing down both the day and time. It may be that Tuesday through Thursday early evenings are your best time. If you know that, your goal should be to devote that time to writing. There’s no reason to waste your creative time doing laundry or watching TV, is there?

Secondly, think about yourself. Are you a left-brained person who needs everything organized? When you take a trip, do you have a detailed itinerary and avoid detours? If so, it’s probable that you’re a plotter and will be more productive creating an outline before you begin writing.

If you’re an explorer who finds more pleasure in the journey than the destination, you may be a seat-of-the-pants writer (sometimes called a pantser). It’s also possible that you’re a combination of the two, that you may start with an outline but find that your story takes you in unexpected directions when you write. That’s good, but so too is being a pure plotter or pantser, if that’s where you’re most comfortable and most productive.

The essential thing is to discover what works best for you. I’m not telling you to ignore the advice you’ve received, but I am saying that you need to consider whether the techniques that are being touted as the only way to succeed are ones that fit you.

One size does not fit all. The truth is, there is one right way to write. What is it? The one that works for you. 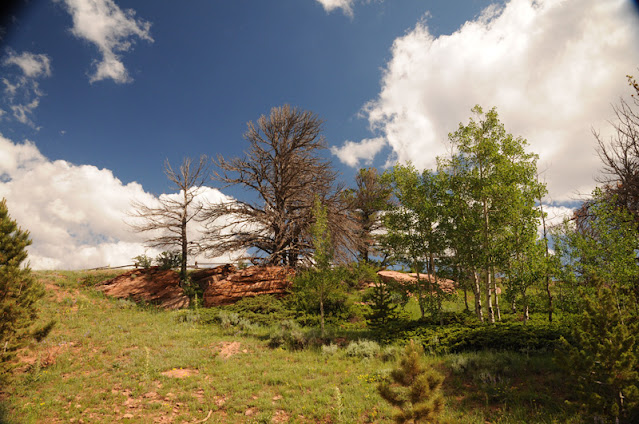 Is this your image of summer in Wyoming? The combination of deep blue skies, puffy cumulus clouds, and green grass says, "It's summer!" to me. After long months of golden grass and bare tree branches, it's wonderful to know that summer has returned.

This photo and all of them I'll be sharing this month were taken at Pole Mountain in the Medicine Bow National Forest.