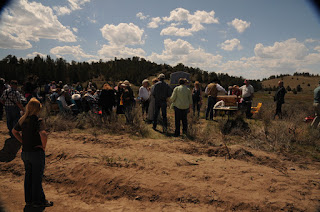 As you can see, the service to honor the pioneers attracted a number of people.  If you look at the table on the right side, you'll see the wooden boxes, now closed and ready for reburial.

In addition to the memorial service and burial, the afternoon's events included the unveiling of the commemorative sign provided by the Platte County Historical Society and the Daughters of the American Revolution.  (That's a DAR member in historic costume.) 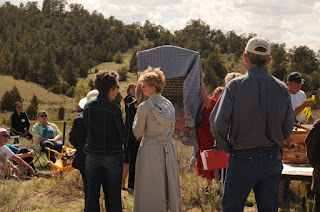 While some people might have covered the sign with a tarp, not so the PCHS and the DAR.  If you look at the bottom of the sign, you'll see that they used a quilt.  How fitting! 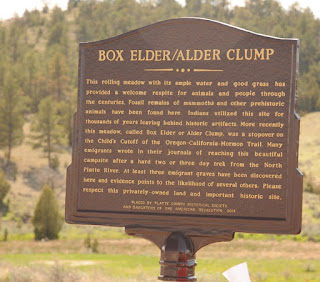 And so, with much fanfare including speeches and music, three pioneers were returned to their original burial site, and a new historical marker was unveiled.  The pioneers were indeed honored.

Posted by Amanda Cabot at 1:00 AM No comments: 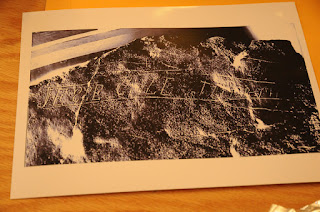 When they buried their dead, many of the pioneers were unable to construct headstones or other markers to identify their loved ones' final resting place.  In some cases, though, they attempted to leave a record.  This is an enhanced photograph of a stone found with the youngest of the three pioneers who were honored in the May 2, 2015 ceremony.

The stone says "Jesse Cole July 14, 186" with the last digit having been destroyed by the elements.  While you might think this was a headstone, it was not.  Instead, it was placed on top of Jesse's body before it was buried. 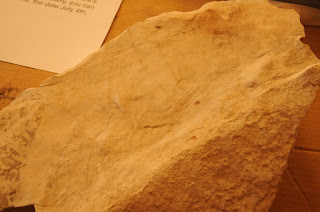 This is the unenhanced version of the stone.

Researchers determined that Jesse Cole was a teenager, perhaps thirteen or fourteen years old, and that he had some Native American ancestry.  The other two pioneers were women, one of whom had recently given birth.  Based on diary entries from Abigail Scott Duniway, it is thought that this woman might have been Ann Scott, Abigail's mother.  Researchers named the other woman "Glenda" in honor of the nearby town of Glendo. 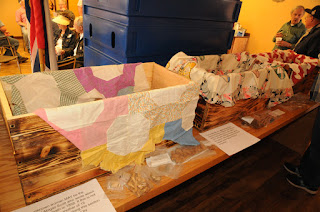 Box Elder/ Alder Clump wasn't simply a place to camp.  It was also a place for pioneers to bury their dead.  And there were, unfortunately, all too many of them.  While the journey west promised a better life, it was a perilous one, with an estimated 10% of the pioneers dying along the way from injuries and diseases like cholera. This particular site became a well-known graveyard.

Though no one knows how many pioneers were buried here, between 1974 and 2005 remains of three pioneers were uncovered.  These bones and artifacts were subsequently studied by the University of Wyoming's Anthropology Department, and -- thanks to modern forensic science -- the researchers were able to determine the three pioneers' approximate ages, gender and racial background.

This year the remains were returned to the Platte County Historical Society for reburial at the site.  Though the pioneers rarely had coffins for their loved ones, the PCHS and the Daughters of the American Revolution wanted to honor these three pioneers.  The local high school constructed sturdy wooden boxes for each of the deceased, and members donated antique quilts to wrap the bones.

If you look closely, you can see there are three boxes and three different quilts.  The plastic bags in front of the boxes contain artifacts found with the skeletons.  These included buttons and beads.

Prior to the memorial service, the public was invited to view the remains at the Glendo Town Hall, then travel twenty miles to the reburial site.  As you can imagine, it was a somber occasion but one I'll never forget.
Posted by Amanda Cabot at 1:00 AM No comments: 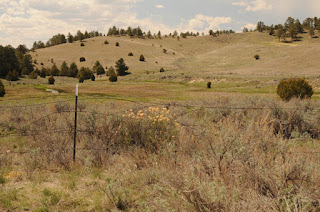 Does the name Box Elder/ Alder Clump Spring mean anything to you?  It was a new one for me, too, but I learned that it was an important part of the Oregon Trail in Wyoming.  The combination of a spring (look closely and you can see the water) and a clump of trees made it a welcome place for pioneers to camp or at least take their noon break.

Although the site itself was relatively flat, you can see the rolling hills beyond it. And in the distance, across a deceptively flat-looking prairie, is Laramie Peak.  While the wagon trains skirted the peak, its presence reminded them of the harsh terrain to come. 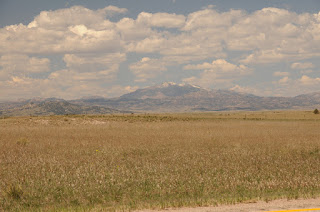 Is it any wonder they chose to refresh themselves by a shaded spring?  And, as we'll discuss next week, they did more than camp and eat here.

Posted by Amanda Cabot at 1:00 AM No comments: