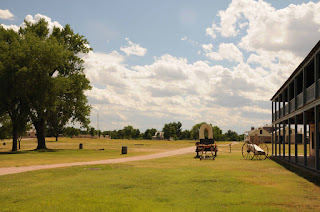 By now you all know that Fort Laramie is one of my favorite places in Wyoming, so you won't be surprised that I've included another picture of it.  What appeals to me about this one is the contrast of the two forms of transportation (covered wagon and Mormon hand cart) with the apparent serenity of the fort.  Of course, when it was an active fort, there would have been hundreds of people scurrying around, everyone from Army dependents to laundresses.  And, most likely, the parade ground would have been filled with soldiers marching.  Even during the final years of the fort, when there was little danger of attack, military discipline required that soldiers drill.  You might even have seen one being disciplined by having to carry a heavy log on his back as he marched.  I can't imagine doing that, particularly during a hot Wyoming summer with the sun beating down.
Posted by Amanda Cabot at 7:00 AM No comments: 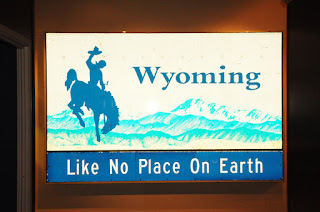 Tomorrow is Thanksgiving Day in the United States, and as I think of the many reasons I have to be thankful, one is that I'm living in Wyoming.  As this early postcard that I discovered in a special exhibit at the State Museum says, it's like no place on earth.

Whatever you are doing tomorrow, I hope you have many reasons to give thanks.
Posted by Amanda Cabot at 7:00 AM 1 comment: 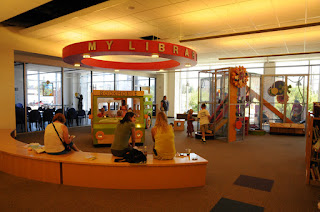 It's no secret that one of my favorite places in Cheyenne is the Laramie County Library.  When I was a child, libraries were quiet places filled with books -- great places to go but not necessarily to linger.  It's different now.  Laramie County's library has a whole floor devoted to children and young adults.  Yes, there are many books, but there are also fun experiences for young patrons, including this area with a stationary bookmobile and a strange contraption that transports books up and around.  If you're ever in Cheyenne, this should be on your 'must see' list. 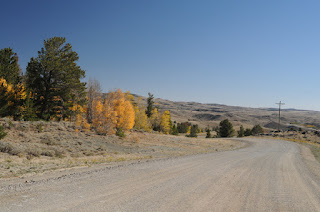 For me, this is one of the quintessential "autumn in Wyoming" pictures -- beautiful skies, golden aspens and no cars.  I have to admit that I couldn't live in such a remote area, but it's wonderful for a visit.  What do you think?  Would you prefer a resort and spa?