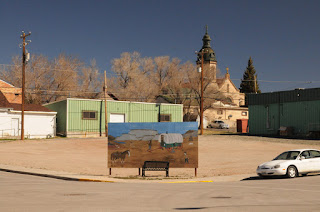 Sheepherders played an important role in the history of Carbon County, where Rawlins is located.  Although I knew that sheep wagons, which some have described as the first campers, were a fixture in Wyoming, until I took the mural tour, I didn't know that James Candlish, a Rawlins blacksmith, is believed to have invented them. 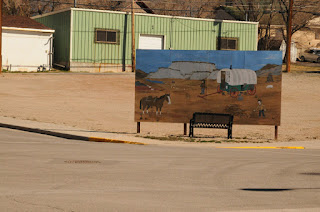 The wagons include a bed area, a small table, cupboards and (as you can see from the chimney) a stove.  This was truly home on the range. 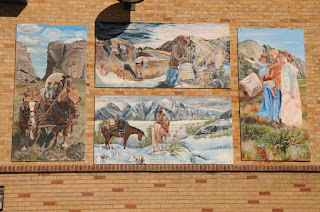 Located on the side of a building, this mural -- or, to be more precise -- these four murals depict the challenges along the Mormon Trail, focusing on the Martin Handcart Company, which lost more than 150 pioneers in a devastating blizzard.

Unlike the other murals, each of which had only one artist, this one has two: a mother and daughter team.
Posted by Amanda Cabot at 7:00 AM No comments: 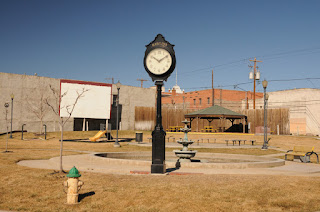 According to the pamphlet describing the stops along Rawlins' mural tour, this is "a symbolic representation of the changes that occurred with the arrival of settlers in the West."  Obviously, other changes have occurred since the pamphlet was printed, and the mural is no longer visible.

Despite the blank sign, I enjoyed seeing this small park across the street from the train depot.  Whether they were there as passengers or simply waiting for friends or family, I can imagine people looking at the clock to see how long it was before the next train would arrive.
Posted by Amanda Cabot at 7:00 AM No comments: 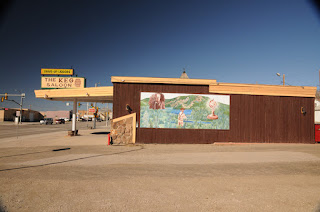 We're going to continue our exploration of Rawlins' mural tour throughout July.  This mural is the first one you encounter as you enter town from the east.  As you can see, it's mounted on the side of a building.  But what are the objects in the mural?  Let's take a closer look. 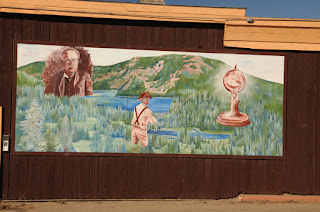 This mural celebrates Thomas Edison's fishing trip to Battle Lake, approximately 70 miles south of Rawlins.  Who would have thought that a fishing trip would inspire the famous inventor?  That's exactly what happened.  While he was at Battle Lake, Edison paid particular attention to the fiber line on his fishing pole and later experimented with it as a filament for the incandescent light bulb.

I've always said that inspiration can come at any time, and here's proof. 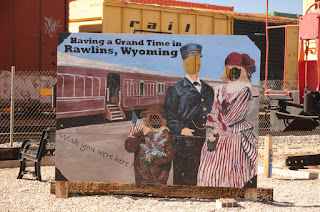 How many towns do you know that have commissioned twelve murals to commemorate local history?  Rawlins did exactly that.

Although this isn't the first mural you encounter when you enter town from the east, it's the perfect one to welcome you to the mural tour.  As you can guess from the train cars in the background, this one's located at the train depot.  The holes instead of faces for the conductor as well as the mother and child give visitors a chance to become part of the giant postcard.  Note that the attention to detail includes those black mounting corners that so many of us have used to put pictures and postcards into scrapbooks.

Have you ever had your picture taken by a sign similar to this?


Posted by Amanda Cabot at 7:00 AM No comments: