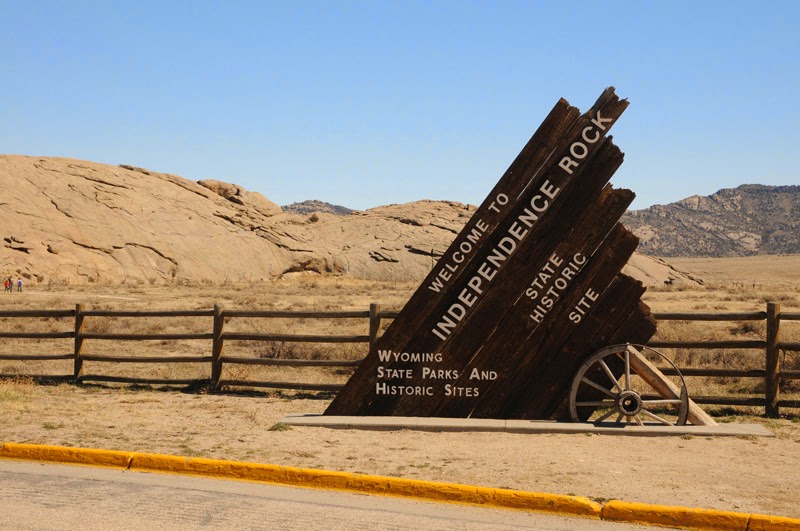 One of the major landmarks along the Oregon Trail was Independence Rock, a mammoth outcropping of granite that covers 24 acres.  As you can see, it's now a Wyoming State Historic Site.  (Question: does the sign remind you of a wagon on its side?)

First named by fur traders who were camped in the area on July 4, 1824, Independence Rock had a special significance for pioneers on the Oregon Trail.  They knew that if they hadn't reached this milestone by Independence Day, they risked being caught in snowstorms before they reached their destination.

As was the case with Register Cliffs further east in Wyoming, Independence Rock was a place for emigrants to carve their names and leave messages.  Unlike Register Cliff, which is composed of softer stone that made inscriptions relatively easy, the granite of Independence Rock meant pioneers had a harder time inscribing anything on it. 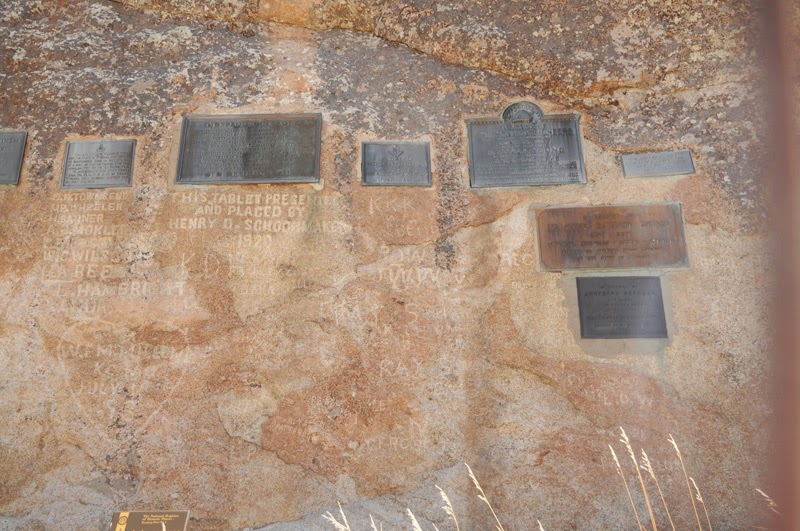 Many of the inscriptions that are still visible are more recent than the Oregon Trail, and the plaques were added during the twentieth century.  Now the site is protected by a fence to prevent further damage.

Although difficult to read, this sign provides more information about what a Jesuit missionary called "The Great Record of the Desert." 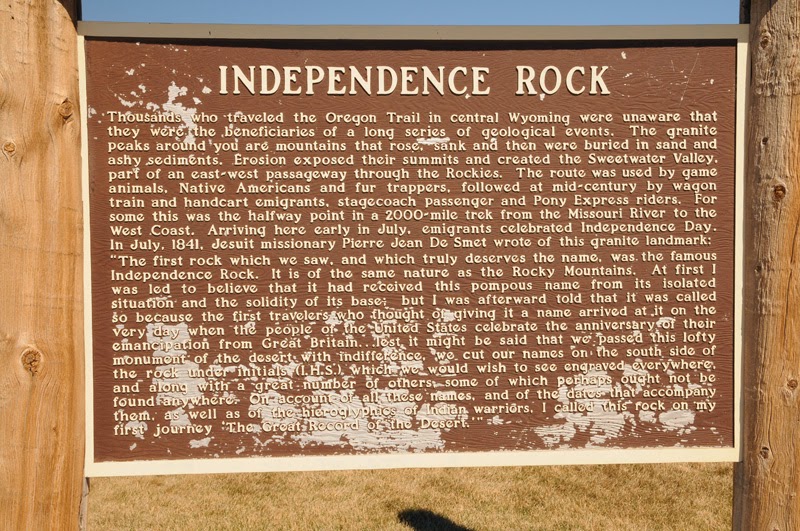 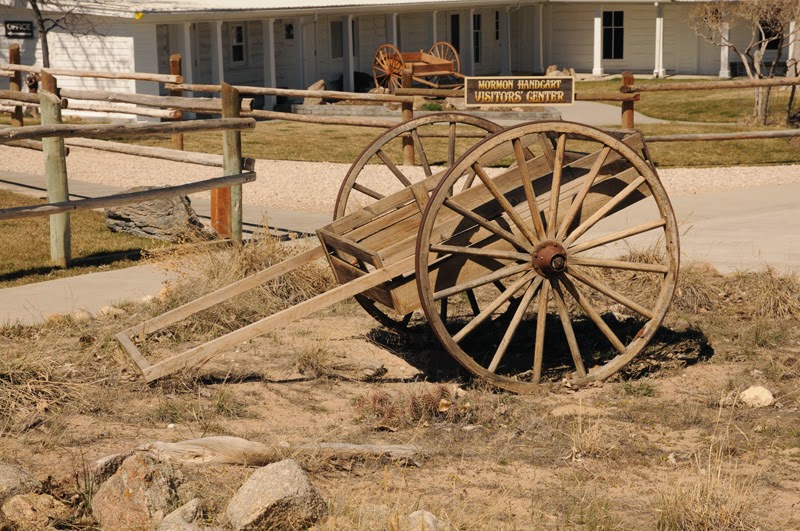 When I think of pioneers heading west, I envision Conestoga wagons, but not all emigrants had enough money to buy the wagons and the oxen to pull them.  Some, most notably Mormon pioneers, pulled handcarts.

Believe it or not, each handcart was designed to hold all the possessions of a family of five. 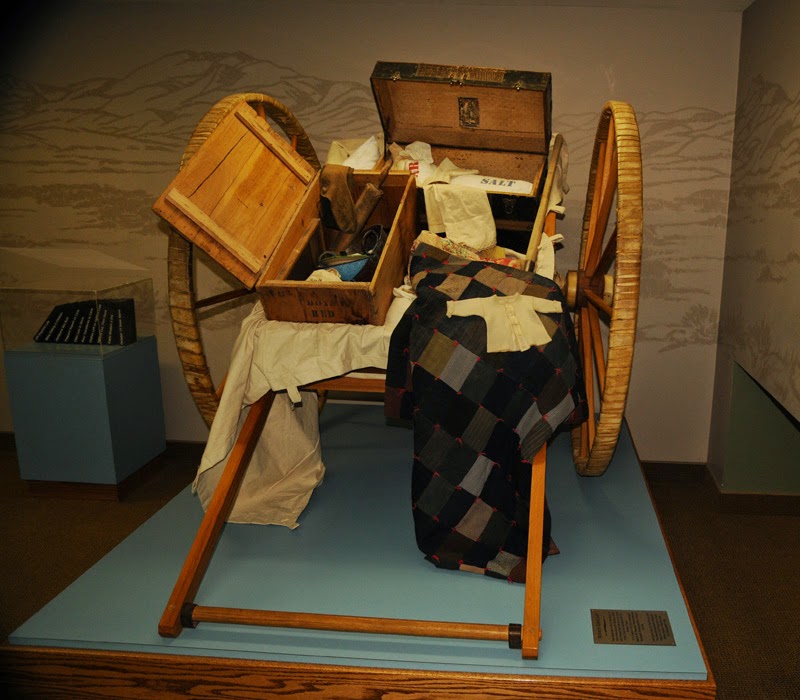 While the contents of many handcarts were simply covered with a blanket, others resembled Conestoga wagons and had canvas tops. 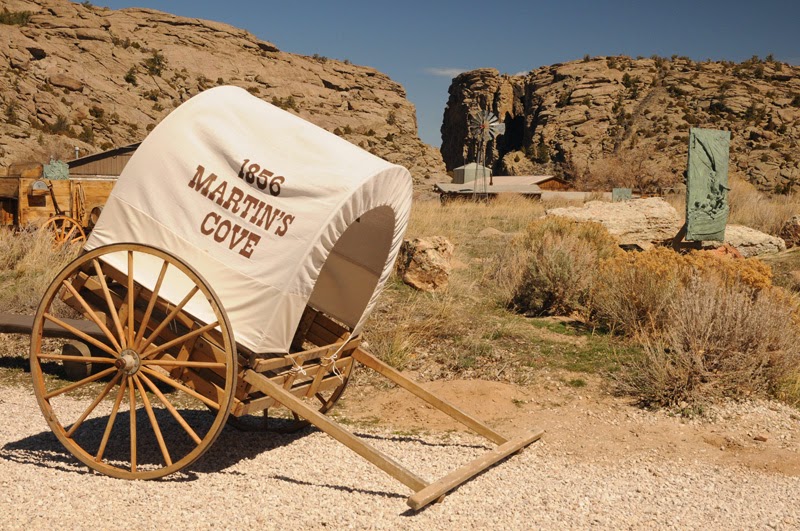 These pictures were taken at the Martin's Cove Mormon Handcart Visitor Center which commemorates not only the entire handcart journey but also the many emigrants who lost their lives at Martin's Cove.  A late start, an early snowstorm and some poor decisions resulted in the deaths of almost a quarter of the 600 people who formed the Edward Martin Handcart Company.
Posted by Amanda Cabot at 7:00 AM No comments: 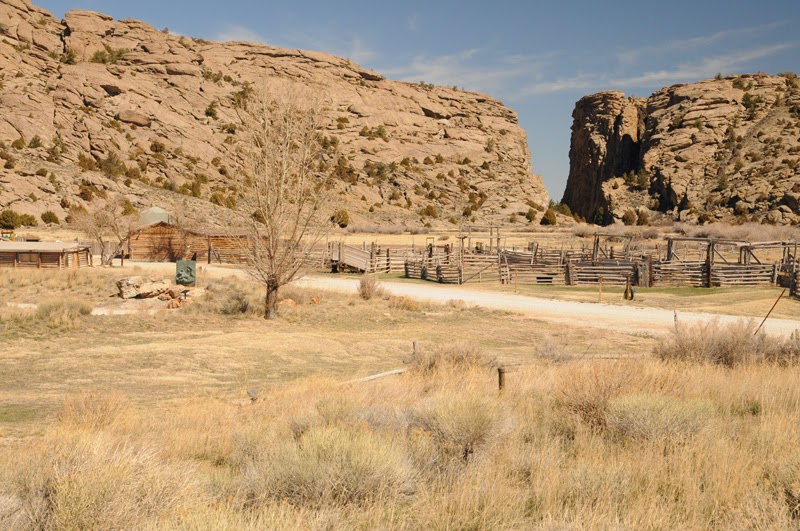 Have you ever heard of Devil's Gate?  If you were a pioneer on the Oregon Trail, you would have.  This Sweetwater River gorge was considered one of the major landmarks along the way.  Although wagons could not traverse the narrow pass, the emigrants found the area with its forage for livestock and wood for fuel a good place to camp. 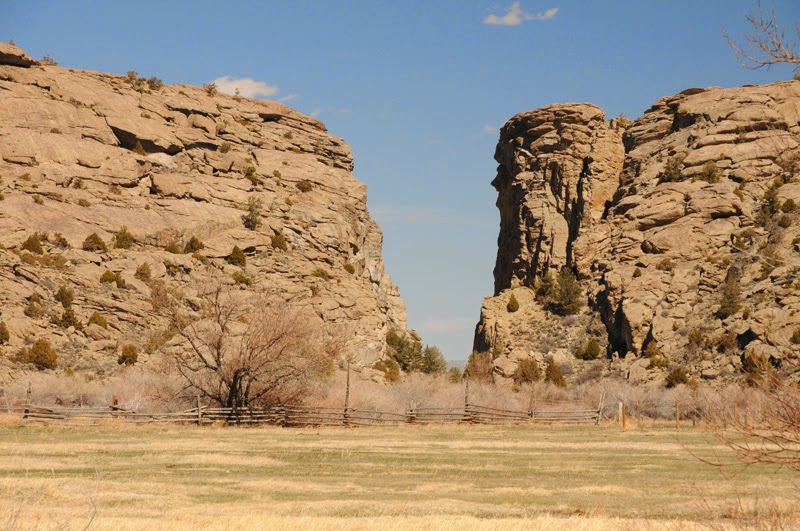 Besides the grass and wood, the site had the advantage of being partially blocked from the wind, thanks to those high cliffs.  Modern visitors can take a footpath to the gap or simply enjoy the natural beauty from the road.
Posted by Amanda Cabot at 7:00 AM No comments: 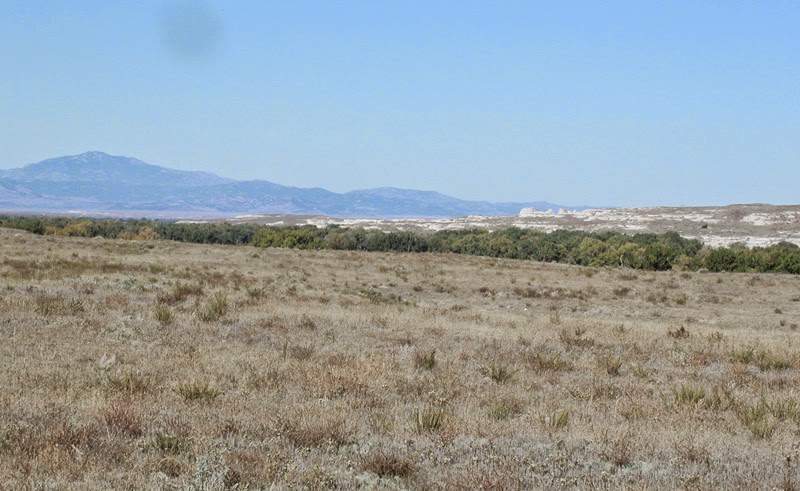 This is the scene pioneers would have faced as they headed west from Fort Laramie toward Laramie Peak,  the mountain in the background.

At first glance, it may not look as if this is challenging terrain, but consider some of the hazards along the way. 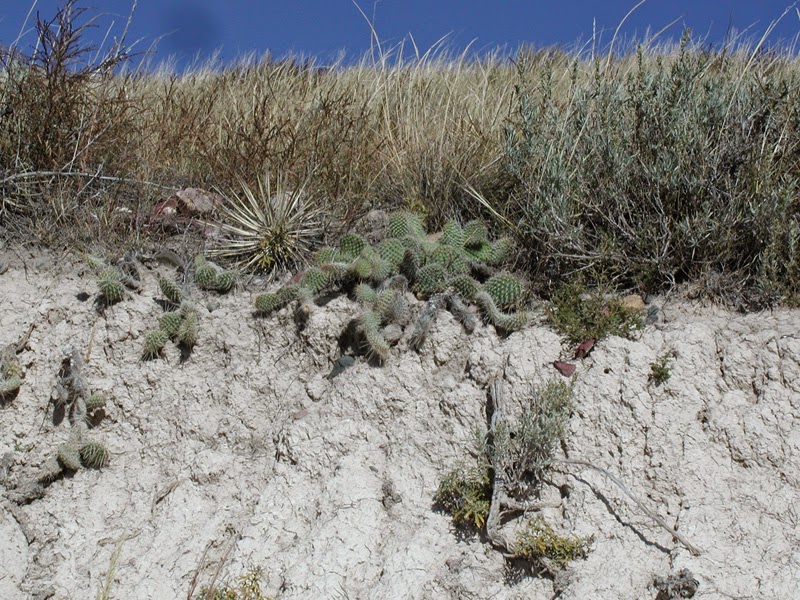 Although most pioneers began the journey with sturdy boots, when they wore out, some had no replacements.  The Historic Trails Interpretive Center in Casper shows women and children walking barefoot across the prairie.  Even with boots, I wouldn't want to step on a prickly pear cactus.  Those spiky yucca leaves were even worse.  They have sharp serrated edges that can cut a skirt or unprotected skin.  Can you imagine how painful that would have been? 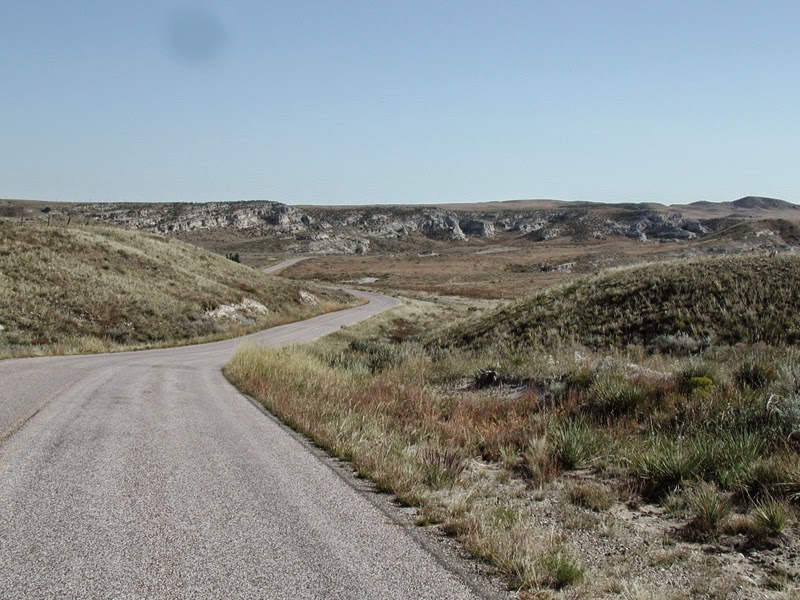 And, although the terrain in the first picture may have looked level, the reality is that the prairie consists of rolling ground.  Of course this road wasn't built in the middle of the nineteenth century, but it shows you just how many hills the pioneers had to travel.  I suspect that after a day of walking, even a slight incline would have been tiring. 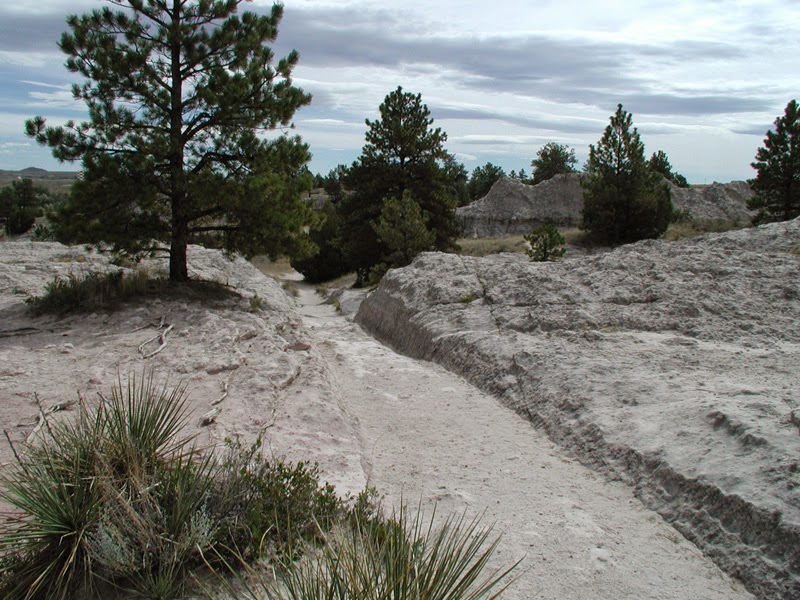 Yet, despite all the challenges, hundreds of thousands of people made the journey west, their wagons leaving indelible marks in the limestone.  What courageous, strong people they were!


This month, in honor of the publication of The Oregon Trail Romance Collection, I'm going to feature Wyoming sites along the Oregon Trail in my Wednesday in Wyoming posts.

As pioneers entered what is now the state of Wyoming, the first major landmark they encountered was Fort Laramie.  And without a doubt, the most prominent building was the bachelor officers' quarters (BOQ), quickly nicknamed "Old Bedlam" because of the rowdy parties held there. 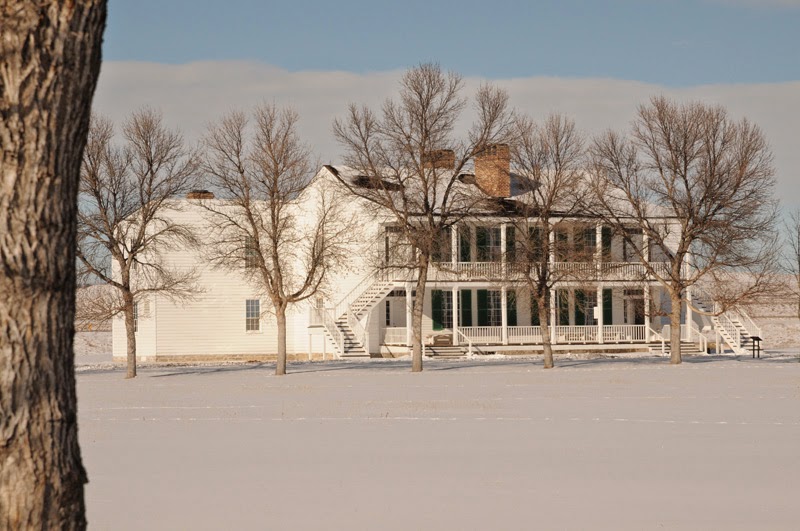 Built in 1849, Old Bedlam is the oldest military building in Wyoming and had a variety of uses.  Although it's most famous as a BOQ, it also served as the post headquarters and later housed married officers. 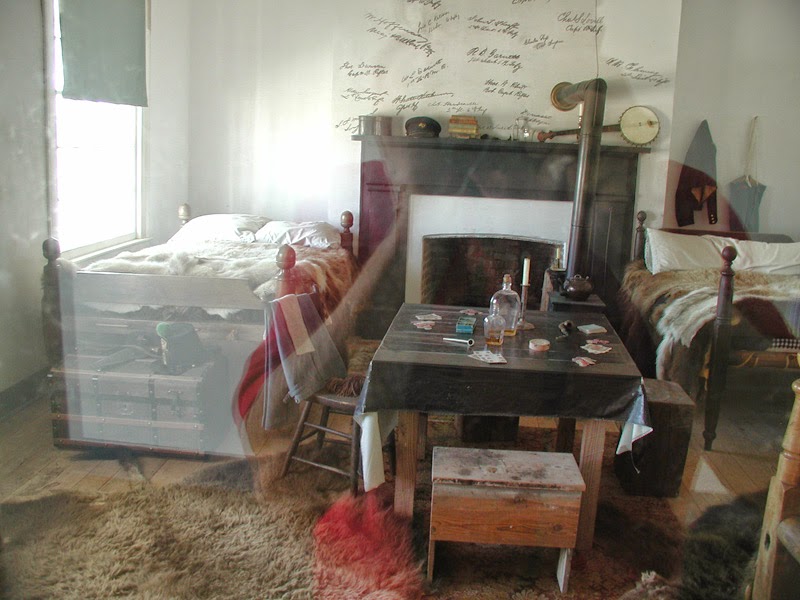 As you can see, some of the officers left permanent reminders of their stay at Old Bedlam by signing the wall over the fireplace.  The table with cards and liquor bottles gives you an idea of how they spent their free time. 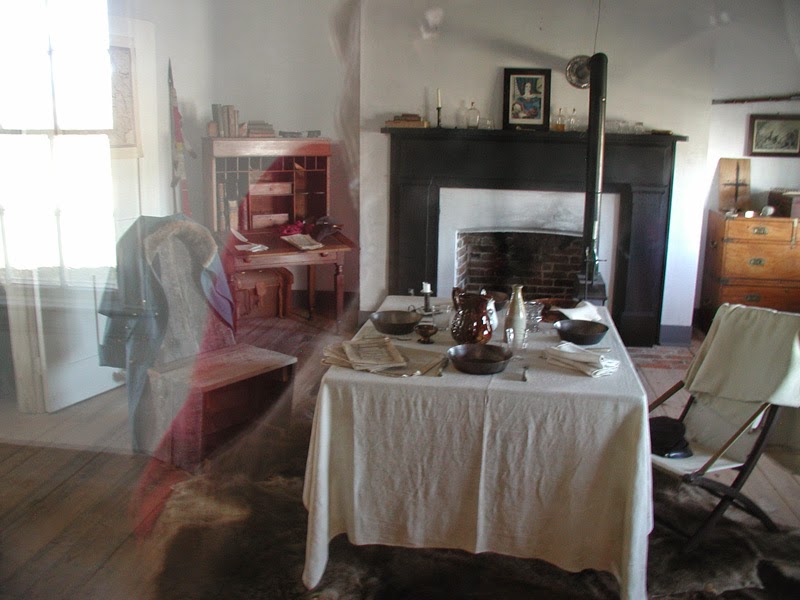 While the enlisted men had large dining halls and probably never saw a tablecloth, the officers had more privacy and luxury.  Still, life was not easy on a western fort.  Although there were few battles to be fought, the harsh conditions and boredom led to a relatively high desertion rate.

I imagine that the arrival of wagon trains during the summer months helped alleviate the soldiers' boredom.  For the pioneers, Fort Laramie was the last place to rest and restock before they faced the most difficult part of their journey: crossing the mountains.