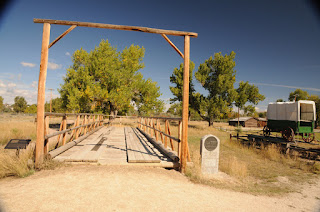 Not all of the Fort Caspar Museum exhibits are indoors. In addition to the fort itself, this reconstruction of a bridge over the Platter River and a replica of the Mormon ferry that carried pioneers across the sometimes treacherous river highlight important aspects of central Wyoming's history.

And, if you wondered what the marker was, it's to commemorate the Oregon Trail. 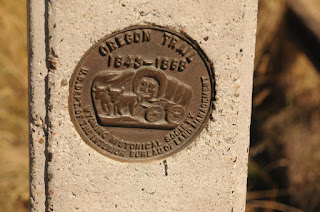 I hope you've enjoyed a peek inside the museum and that you've learned a little bit about the state I now call home.
Posted by Amanda Cabot at 6:00 AM No comments: 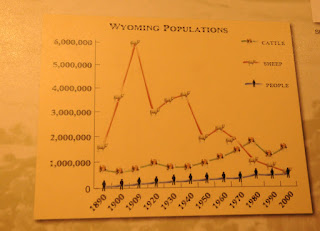 One of the bits of trivia that always amuses me is that there are more pronghorn (what some call antelope) in Wyoming than people. What I hadn't realized until I visited the Fort Caspar Museum was that sheep populations were once so high and that they far exceeded both human and cattle.

No wonder there was conflict between the cattle and sheep ranchers!
Posted by Amanda Cabot at 6:00 AM No comments: 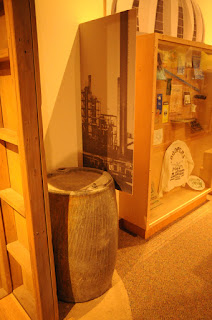 You probably recognized this barrel, but I didn't.  Although I've heard countless news broadcasts talking about the price of a barrel of oil, I'd never actually seen an oil barrel.

Central Wyoming, which is where the Fort Caspar Museum is located, is oil country, so it's no surprise that the museum features such an iconic item.
Posted by Amanda Cabot at 6:00 AM No comments:

Behind the Cover for A Borrowed Dream 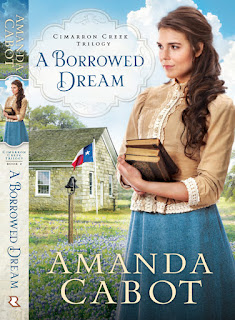 Back by popular demand!

Yes, it's true.  So many of you have told me how much you enjoy my blogs about the cover design process that I plan to blog about each of my books' covers. I'm undoubtedly prejudiced, but I think the covers Revell has given me are gorgeous, and I continue to be fascinated by the amount of work, attention to detail, and sheer artistry that goes into each one.

While a number of people are involved in the creation of each cover, major kudos go to Art Director Cheryl Van Andel, who's responsible for the entire process, and graphic designer Dan Thornberg of Design Source Creative Services, who turned Cheryl's ideas into the cover you see.

The process always begins the same way, with a questionnaire that each author completes. In it, we describe our characters -- not only their physical traits, but also their personalities -- and the basic setting of the book. We're also asked if there are any landmarks that play a prominent role in the story. You'll see how that information is used in the design.

Catherine Whitfield, the heroine of A Borrowed Dream, is a beautiful brunette who's also the town's schoolteacher. Though she was once a carefree young girl, her mother's death has left her with a deep sorrow.

Cheryl and Dan took that description into account when they chose Jenna as the model and again when she posed for the photo shoot. 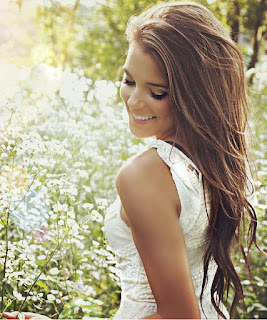 Though Jenna's smiling here, she's much more serious when she's portraying Catherine. Does that sound as if she's an actress? Perhaps ...

Once the model is chosen, the next step is finding the right clothing. As a teacher, Catherine normally wears skirts and blouses, so Revell gave me a choice for both. 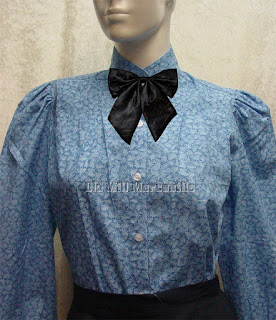 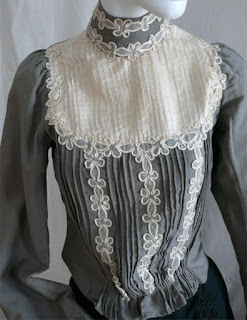 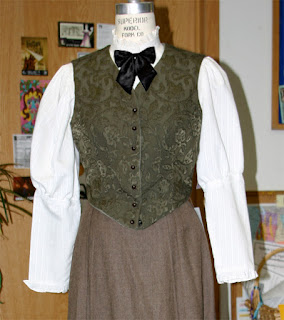 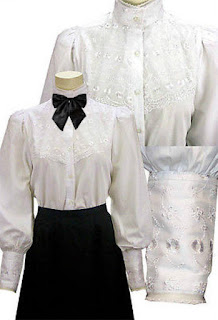 While each of these blouse selections has its own appeal, none of them felt right for the time period. Fortunately, there were other choices, including this one: 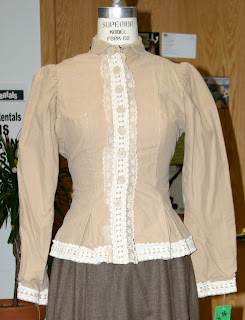 To my delight, this design was virtually identical to one I'd seen in my favorite historic costume book. It was perfect for Catherine.

Next came skirts, and again, I had a choice. 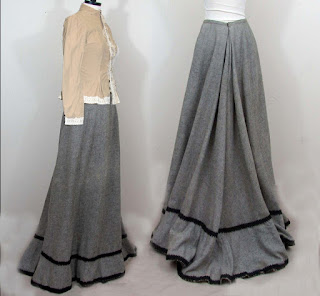 I had no strong preference for one over the other, and neither did Cheryl, so she let Dan decide which would work best. As you'll see, he experimented with both during the photo shoot.

As is often the case, the photo shoot for A Borrowed Dream's cover took place in front of a plain white background. 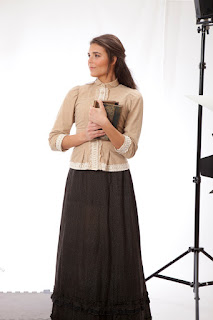 Notice that Jenna is wearing the first of the skirts here. 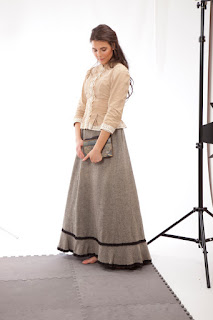 And here she's in the second. Don't you love the bare feet? 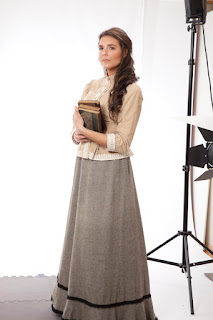 Here she is again in the second skirt.

I liked each of these poses, but there's no doubt that the one that was ultimately chosen is my favorite. Why? It captures both Catherine's somber side and her optimism. 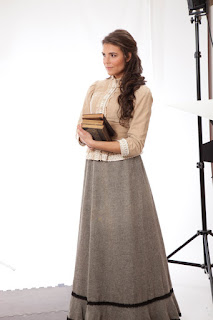 And so, with the photo shoot complete, it was time for Dan to work on the background.

As part of the author's questionnaire, I mentioned that while a schoolhouse might be good in the background, it needed to be made of stone, not a frame building like the schoolhouse on the cover of Tomorrow's Garden.

Dan found a wonderful stone building to use as the starting point for the background. 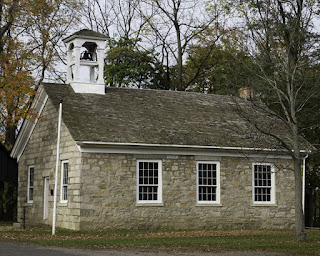 Notice that I said "starting point." If you compare this to the schoolhouse on the cover, you'll see a number of changes.


But what's a school without a bell? To add more interest to the cover, Dan created a free-standing bell that would be easier for the pupils to ring. He started with a bell. 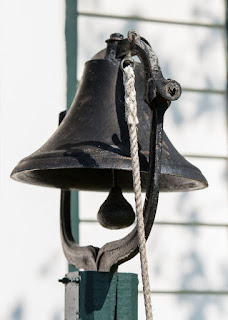 When Cheryl sent me the next picture, I wondered how it had been used, since there are no birdhouses on the cover. 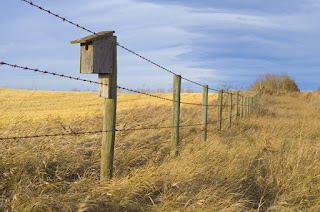 Then I realized that Dan had used one of the fence posts to create a post for the bell. Clever!

Now that the basic elements were complete, he added grass, bluebonnets, and clouds. With the addition of the title and my name, the cover was complete. Or was it?

There's more to a book cover than the front and spine. Back cover copy is almost as important as the cover itself in helping readers decide whether or not to buy a book. Fortunately, Revell has a staff of experts to write the back cover copy and choose all the elements that make it as appealing as the cover itself. I'm always amazed at how well they capture the essence of a story in only a few paragraphs.

With everything approved, the cover was ready for printing. But, wait! Did you notice that something changed between the photo shoot and the final cover?

Yes,  Catherine's skirt became blue. Not only does the blue complement the blouse better than the original gray, but it highlights the bluebonnets and the title. This is yet another example of Dan and Cheryl's attention to detail and their determination to make this an eye-catching cover. 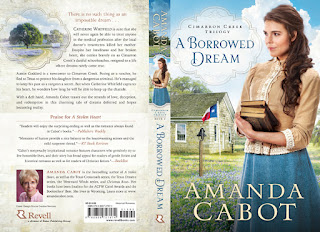 Did it catch your eye? I hope so. And I hope you enjoyed reading about the whole cover art design process. It's one of my favorite parts of the journey from raw manuscript to finished book.

I've included more information about A Borrowed Dream along with an excerpt on my web page.  And if you'd like to order a copy, here are some buying links:
Amazon
Barnes & Noble
Christian Book Distributors 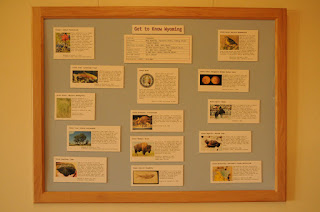 It's just one exhibit -- a simple series of pictures -- but if you look closely, you'll discover that it tells you a lot about Wyoming, including the state's mammals and butterfly.  Who knew that we had a state butterfly? 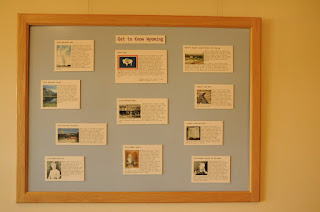 These and many other exhibits are part of the Fort Caspar Museum.
Posted by Amanda Cabot at 6:00 AM No comments: 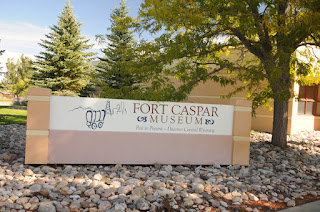 This month we're going to explore the Fort Caspar Museum. Not only is it the gateway to Fort Caspar itself, which I highlighted during November, but it's filled with interesting facts about Wyoming.

Here's one that surprised me: 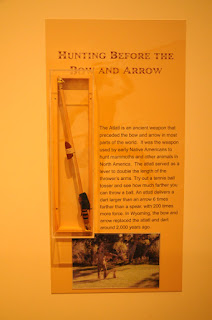 I'd never heard of an atlatl and was intrigued by this predecessor to the bow and arrow.  Were you familiar with atlatls?  If so, where did you learn about them?
Posted by Amanda Cabot at 6:00 AM No comments: