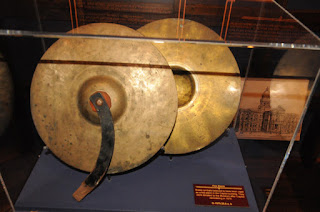 Why would the Wyoming State Museum feature cymbals in a display about the Capitol?  You might be surprised.  I know I was.

Believe it or not, it is thought that the cymbals were used as a fire alarm.  Can you imagine that happening now?
Posted by Amanda Cabot at 6:00 AM No comments: 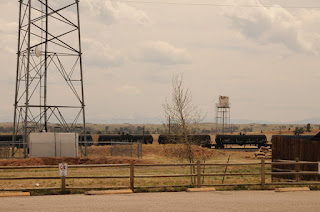 As I mentioned in a post earlier this month, you'll find trains almost everywhere in Wyoming.  This one is in Buford, a town that achieved worldwide notice a few years ago when it was sold at auction.

Though the town -- population 1 -- has new owners, one thing hasn't changed: the trains that run past it.
Posted by Amanda Cabot at 6:00 AM No comments:

Who would have thought that a wrong turn would lead to this?  I've been to Chugwater before, but thanks to a new navigation system that kept trying to send me to a town I'd deliberately bypassed, I discovered this little gem.

Yes, it's a mural.  I'm always intrigued by the paintings various towns use to decorate the sides of otherwise ordinary buildings.  This one in Chugwater impressed me with the way the artists incorporated the light pole into the picture, partially camouflaging it as part of the windmill. 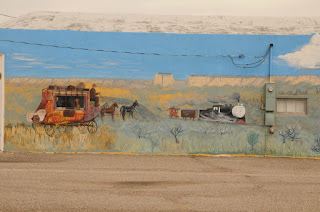 You can see that it was more difficult to hide the electrical box and wires, but it's still an interesting mural and a great way to celebrate the town and its history.

What's missing is the town's current claim to fame -- Chugwater Chili.  There's even an annual chili cookoff in June.  If you're ever in the area then, you might want to see which variety of chili you find the best.
Posted by Amanda Cabot at 6:00 AM No comments: 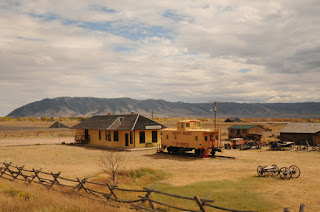 Trains.  It's hard to drive very far in Wyoming without seeing one.  Though early trains carried passengers, now most of them are used for freight, hauling the state's coal and natural gas to markets in other parts of the country.

Even small towns like Centennial, with a population under 300, celebrate the influence that trains have had on Wyoming's economy.  This photo shows part of Centennial's museum and features both the town's historic depot and a train.
Posted by Amanda Cabot at 6:00 AM No comments: 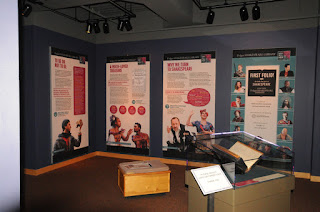 Shakespeare in Wyoming?  Yes, indeed.  Not only was Jim Bridger, the famed mountain man, able to quote Shakespeare at length, but only six months after it was founded, the city of Cheyenne was the site of a production of "Othello."  Later, Edwin Booth, brother of -- you guessed it -- John Wilkes Booth, starred in a production of "Hamlet" at the Cheyenne Opera House.

With that history, is it any surprise that when the Folger Shakespeare Library arranged its fifty-state tour to celebrate the four-hundredth anniversary of Shakespeare's death by sending one of the famous First Folios on tour, Cheyenne was the Wyoming city selected to host it?

Here's a close-up picture of the First Folio, open to the well-known "to be, or not to be" scene from "Hamlet." 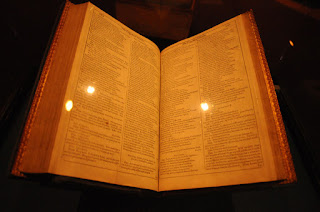