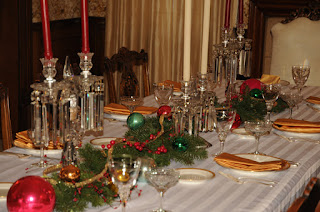 Last week we saw how part of the kitchen at the Historic Governors' Mansion was decorated for Christmas.  Let's end the year by visiting the dining room, where guests enjoyed the results of all that cooking.

While few of us host such elegant and elaborate meals, there's no doubt that one of the joys of the holiday season is sharing a meal with friends and family.  I hope that your holidays have been filled with health and happiness, and I wish you and your loved ones a joyous new year. 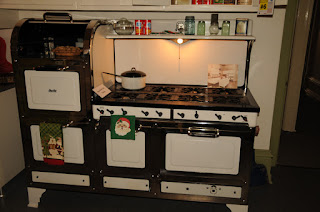 As the countdown to Christmas continues, even the kitchen at the Historic Governors' Mansion has its share of decorations.

As you can see from the eight burners and the multiple ovens, Wyoming's governors were accustomed to hosting large dinners. No microwaves here!

Like the other pictures I'm sharing this month, this one comes from the "Tinsel Through Time" exhibit.
Posted by Amanda Cabot at 6:00 AM No comments:

The Story Behind the WBTS Cover

Did you ever wonder how a cover is created?  I've shared the process that a traditional publisher follows and will do so again, but today I'd like to take you behind the scenes for the creation of the cover for Pamela Trawick's debut novel, Walking Between the Stones.

Since a key scene in the book involves a labyrinth, Pamela wanted the cover to include one.  She provided talented cover designer and best-selling author L.A. Sartor with a photo of the labyrinth that had inspired the story. 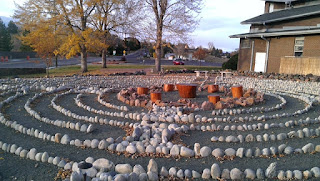 It's an interesting labyrinth, but I couldn't imagine how L.A. would turn this into a cover.  Fortunately, L.A. is a master at Photoshop, not to mention a gifted artist.  Though she was on a writing retreat, supposed to be working on her next book, she spent hours and hours and hours on the cover. 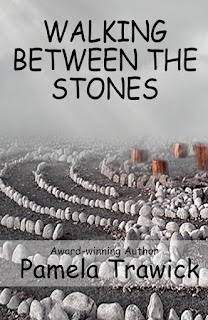 There are a few problems with this, the first of which is the type font.  When I suggested using Comic Sans Serif, L.A. warned me that it wouldn't work.  She was right.  The second problem was that Pamela didn't like the gray sky. 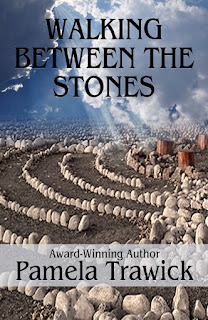 Many of us liked this cover, but Pamela didn't.  She had two very good reasons for being concerned about the sky.  The first was that the dark blue on the left made it difficult to read the letters.  The second was that the sky didn't mirror the tone of the book, which is lighter than readers might expect.

Instead of simply saying that she wasn't pleased with the cover, Pamela took a picture of the sky outside her San Jose condo and suggested L.A. use it. 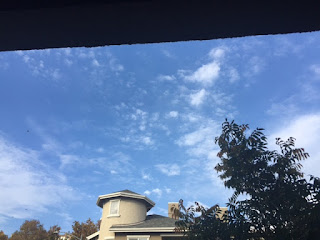 Once again L.A. went back to Photoshop and spent hours getting the sky just right. That was what the cover needed.  The lighter sky provided more contrast with the title, while the lighter clouds speak of hope.

And so, after many iterations and many, many hours of work, we had a finished cover.

Do you like it?  I do.  Even more importantly, Pamela does.

To learn more about Walking Between the Stones or to order a copy, click here:Amazon
Posted by Amanda Cabot at 6:00 AM 8 comments: 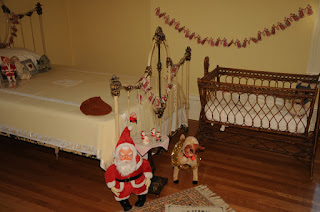 Continuing our tour of the Historic Governors' Mansion's "Tinsel Through Time" exhibit, we're now in one of the children's rooms.

Can you imagine being a child and having all those Santas in your bedroom?  What happened to the story that there's only one Santa?
Posted by Amanda Cabot at 6:00 AM No comments: 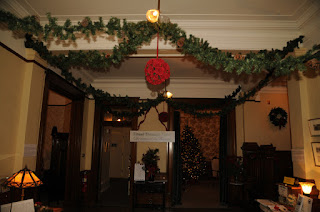 Every year the Historic Governors' Mansion in Cheyenne has a special "Tinsel Through Time" exhibit, with the entire building -- everything from the entrance to the fallout shelter -- decorated for the holidays.  It takes literally months to decorate the house, but -- as you can see -- the results are impressive.
Posted by Amanda Cabot at 6:00 AM No comments:

I'm delighted to announce that my good friend and fellow writer, Pamela Trawick, has just released her first novel, Walking Between the Stones.  This is one of the best books I've read this year and one that I highly recommend. 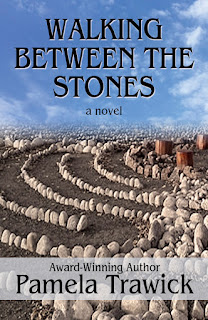 Walking Between the Stones is available in both paperback and e-book formats exclusively at Amazon.  Here are the links: paperback Kindle

My friendship with Pamela began when she and her husband David joined Front Range Christian Fiction Writers soon after it was formed eight years ago.  Have you met people that you knew instinctively would become friends?  That's what happened that day.

But Pamela is more than a friend; she's also an extremely talented writer, so I wasn't surprised when she sold devotions to two different collections. 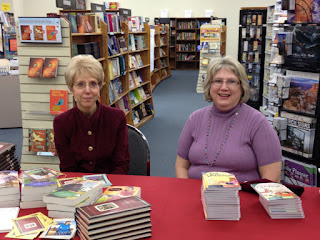 Though the devotions made her a published author, Pamela's dream continued to be to sell a novel.  She experimented with mysteries and other genres, all of which had promise.  But the first time she brought a scene from Walking Between the Stones for the members of FRCFW to critique, I knew this book was special.

Although Pamela's dream was to sell her story to a traditional publisher, all that changed in October when she was diagnosed with Creutzfeldt-Jakob Disease, a very rare, incurable, rapidly progressing brain disease.  She knew she no longer had time for the traditional publishing route, and so a group of us banded together to make her dream come true by preparing her manuscript for independent publishing.

That dream is now reality.  I encourage you to click on the links above to learn more about Walking Between the Stones.  It's a book you won't soon forget.