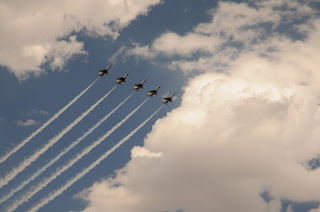 It's Frontier Days time in Cheyenne, and today is Cheyenne Day. In addition to the rodeo itself and the famous Frontier Nights entertainment, there's a pancake breakfast and my favorite event: the US Air Force Thunderbirds show.

What a wonderful example of precision flying, excellence, and teamwork.
Posted by Amanda Cabot at 6:00 AM No comments: 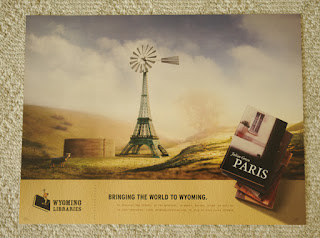 What would you think if you saw this on a billboard? Would it catch your eye? The Eiffel Tower windmill certainly caught my attention. I was so intrigued by it that when I discovered that the Laramie County Library was offering poster-sized versions, I snapped one up and have it hanging where I see it every day.

The campaign is a few years old, but the message is as true as it was then: libraries bring the world to us.

When was the last time you visited your library?
Posted by Amanda Cabot at 6:00 AM No comments: 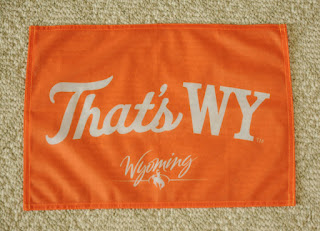 Have you seen any of these flags? They're part of Travel Wyoming's campaign to show the world the many aspects of the state and to answer the question of "Why are you vacationing in Wyoming?"  As the Travel Wyoming site says, "Wyoming is home to 98,000 square miles of possibility."

Travelers who pick up the flags (free, of course) at visitors' centers and at historic sites throughout the state  are encouraged to post photos of themselves and their flags using the hashtag #FlyYourWY.

If you're curious, you can find more information at their web site or by searching with the hashtag.
Posted by Amanda Cabot at 6:00 AM 1 comment: 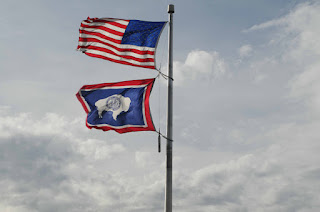 While we celebrate Independence Day across the country, I thought I'd share a few facts that you may or may not know about Wyoming.

Part of the reason Wyoming was granted statehood was that it was the first territory to grant women the right to vote. That happened in 1869, so you can see that it still took a while to become a state.

Wyoming has two nicknames: the Equality State and the Cowboy State. I'm sure you can guess why each one of those was chosen.

Wyoming is proud of its firsts. In addition to women's suffrage, it's the site of the first national park (Yellowstone in 1872) and the first national monument (Devils Tower in 1906). And in 1925 Nellie Tayloe Ross became Wyoming's -- and the nation's -- first woman governor.