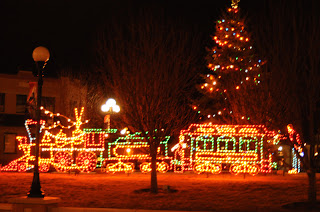 Merry Christmas from the heart of Cheyenne -- Depot Plaza.  As you may know, Cheyenne was one of the towns created as  part of the Union Pacific railroad's expansion west soon after the Civil War.  Even though passenger trains no longer stop here, the railroad still has a presence.  Not only do many freight trains pass through Cheyenne daily, but the depot itself has been restored and turned into a museum and restaurant.  The plaza in front of it serves as the site of summer concerts, farmers' markets and a number of festivals.  And, at this time of the year, the plaza is filled with holiday lights.  Given the city's history, I'm sure you're not surprised that those lights include a train. 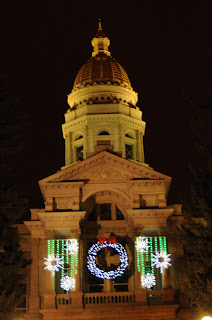 'Tis the season for Christmas lights, and that includes Wyoming's state capitol.

While I was doing research for Waiting for Spring, I became impressed with the city planners' foresight when they constructed the capitol.  The site itself is two city blocks wide.  Although they could have located the building anywhere within those blocks, the original designers positioned the building right in the middle where Hill Street would have come through.  (As a sidenote, once the cornerstone was laid, Hill Street was renamed Capitol Avenue.)  This location meant that when people disembarked from the train and looked north, they couldn't miss the capitol with its gold dome.  I'm sure that was deliberate.  It might even have been an attempt to upstage Union Pacific with its newly constructed red sandstone depot.

The wisdom in reserving two blocks became apparent when, soon after the fairly modest capitol was completed, the legislators realized they needed more space.  Two wings, one on each side, were soon under construction.  And a few decades later, two more wings were added.  The beauty was that in each case, the symmetry of the building could be continued because of the original positioning of the building.

It's been 125 years, but Wyoming's territorial capitol, now its state capitol, still stands in the center of Cheyenne, welcoming visitors as well as legislators.  If you're ever in Cheyenne, don't miss it. 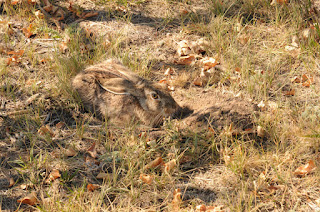 Does this look like a world-class sprinter?  It's a black-tailed jackrabbit.  (Yes, there's a white-tailed variety which is found throughout Wyoming and which grows a white coat for winter.  The black-tailed one doesn't change color and is found only in the southeastern corner of the state.)

Okay, now that I've told you more than you want to know about jackrabbits, let me assure you that they really are great sprinters.  Although they spend a lot of time resting in small depressions like this one, they can hit speeds of 40 mph and can even outrun faster predators, simply because of their ability to zig-zag without losing speed. 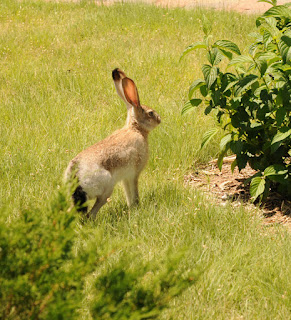 Those ears are pretty impressive, aren't they? As  it turns out, they do more than allow them to hear approaching predators.  They also serve as built-in radiators, dissipating heat.  Amazing, at least to me. 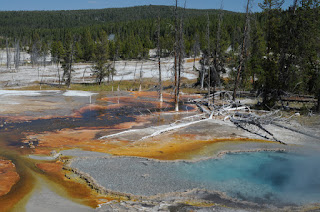 One of the things I love most about Yellowstone is the variety of colors.  It truly amazes me and makes me feel as if I'm in a different world.  And then there's the juxtaposition of steaming pools with snow.  What a wonderful place!