Today marks the last day of our tour of the JCPenney Mother Store, and what better way to end it than to show you a display of items connected to Mr. Penney himself? 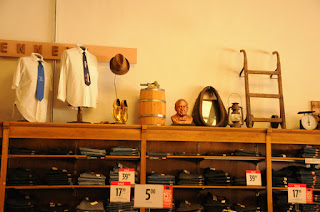 Here we have one of his hats, along with a bronze bust of him in his older days. What do you think about the gold shoes? Too flashy? That's what I thought at first, but then I realized that they were an appropriate gift for a man who started his career at a store called "The Golden Rule."

From everything I've read about him, James Cash Penney embodied the values in the golden rule and left a legacy of hard work, honesty, and caring, not to mention a multi-billion dollar enterprise that bears his name. A fine legacy, indeed. 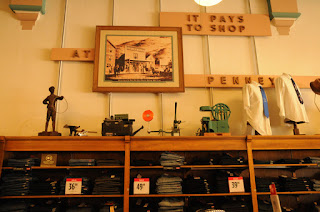 Although the merchandise that's for sale is modern, Penney's wanted visitors to see what the store looked like in the early twentieth century.  To do that, they've placed antique merchandise on top of the shelves and posted some of the store's slogans along with old pictures on the walls. 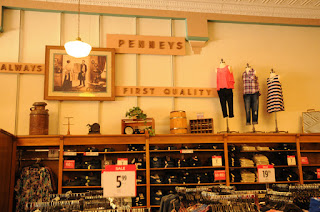 I'm not sure what all these items are, although I did recognize the milk can and the barrel, but I found the combination of old and new appealing.  Do you?
Posted by Amanda Cabot at 6:00 AM 2 comments: 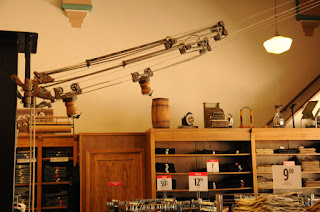 Do you know what this is?  Since I told you last week that my July posts would be about the JCPenney Mother Store, you can guess that the picture was taken there.  But what is the purpose of this system of pulleys?

Believe it or not, it's how customers paid for merchandise and received change in the early days of the store. One of the defining characteristics of the Golden Rule and subsequently the JCPenney stores was that sales were cash only -- no credit -- so a lot of cash changed hands each day.

When a customer gave a clerk payment, the cash was placed in one of the tubes along with the sales slip. The tubes were then hoisted via the pulley system to the second floor of the building, where the cash register was located.  Change was returned by the same method. A unique system, don't you agree? 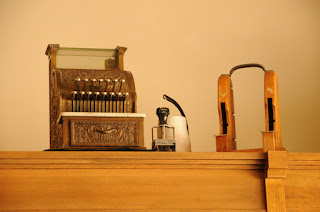 This was the first cash register.

The "cash only" policy remained in effect until 1958, when the store introduced its own credit card, reflecting the fact the country had changed, and Penney's needed to as well if they were going to continue to adhere to their principle of making customer satisfaction their highest priority.

More changes occurred two decades later when bank credit cards began to replace individual store cards. (One of the advantages of the bank credit cards was that it was easier for customers to carry one card and receive one bill rather than dozens.) In response to customer demand, Penney's began accepting Visa in 1979, with Mastercard following in 1980. 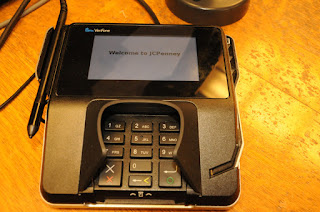 And now, although the Mother Store still maintains a nostalgic air, payment is definitely modern.

Did you know that JCPenney, the national department store chain, had its beginnings in a small town in southwestern Wyoming? I had the pleasure of visiting it last month and am going to share highlights of my trip in this month's Wednesday in Wyoming posts. 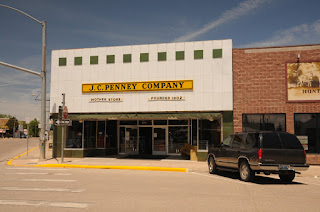 Although this is not the original building or, for that matter the original location, the building is referred to as the "Mother Store" and brings tourists to tiny Kemmerer, Wyoming from all across the country to see where James Cash Penney opened his first store on April 14, 1902.

The first store was part of the Golden Rule chain of stores and he was only a part owner, but by 1907 Penney had full ownership of three Golden Rule stores, and in 1913 he incorporated under the J.C. Penney Company, Inc. name. The rest is history.

As you saw from the first picture, the outside is typical of many stores in small towns, complete with a bench for husbands to sit while their wives shop. Here's the interior. 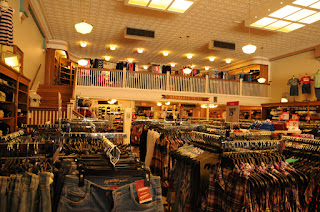 There've been a few changes to it, including the addition of skylights, but much of the rest is the same as it was in the early twentieth century.  The merchandise, however, is all twenty-first century. And the welcome that the store's associates give customers would have made Mr. Penney proud, because it incorporates his maxim "to serve the public, as nearly as we can, to its complete satisfaction."
Posted by Amanda Cabot at 6:00 AM 9 comments: