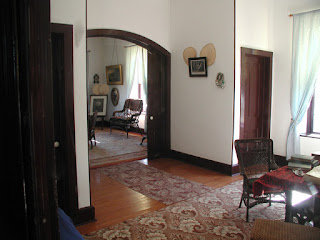 Remember last week's post with the photo of Officers' Row in the 1880s? That hinted at the elegance of the officers' homes. If you have a chance to visit Fort Laramie, you'll see that the interiors live up to that promise.

I was impressed with the stained woodwork and the curved doorway between the office and parlor of the Burt House. In case you were curious, the name comes from Lieutenant Colonel Andrew Burt, who was stationed at the fort twice.

I hope you enjoyed this month's peek into one of Wyoming's most important historic sites. It's well worth the trip. 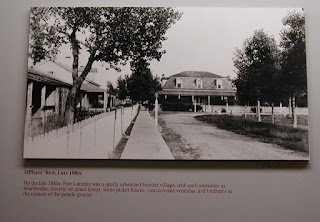 When you picture a western fort, do you imagine boardwalks, picket fences, and buildings with mansard roofs? I certainly didn't ... until I visited Fort Laramie and saw this photo.

Although I was fascinated by the whole fort, this photo intrigued me so much that I knew I had to write a story set here. Summer of Promise was the result. 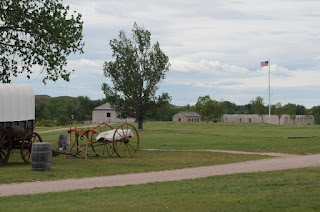 As the years passed, Fort Laramie's function changed, and so did its buildings. When the threat of war with the Native Americans diminished after the Treaty of 1868, more officers brought their wives to the fort, and that brought more changes. While bachelor officers might share rooms in Old Bedlam, married officers needed houses, and so a number of buildings were constructed along what became known as Officers’ Row. The captain’s house, which has been reconstructed, is a two-family dwelling representative of the era. 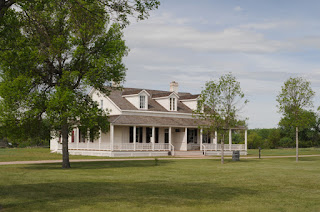 So too is what has been called the Burt House, named after Lt. Col. Andrew Burt, who served two tours of duty at the fort. 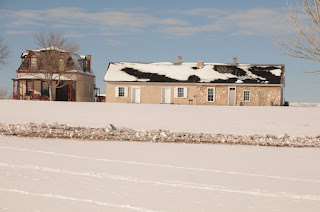 During the fort’s final decade, boardwalks lined Officers’ Row. Houses were surrounded by picket fences, many yards had flower gardens, and women strolled along the boardwalks carrying parasols. There were even birdbaths. But, since this was Wyoming with its infamous winds, the birdbaths weren’t the typical basin-on-a-pedestal style one might find in an eastern garden. Instead, they were circular depressions in the ground, ringed by bricks or stones. 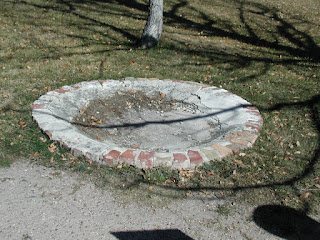 That era ended when the Army no longer needed a large military presence in the area. In 1890 Fort Laramie was decommissioned and its buildings sold at public auction. The fort might have become nothing more than a memory, but a group of Wyoming residents was determined that this part of American history not be lost. Thanks to their efforts, the State of Wyoming acquired the fort in 1937, and in 1938 it became part of the National Park System.

Fort Laramie is now a National Historic Site and a must-see spot for anyone interested in the pioneers’ travels as well as life on the early frontier. Portions of the old fort have been reconstructed, providing an opportunity to see both the interior and the exterior of representative buildings. And while only foundations of other buildings remain, those foundations give visitors an idea of how extensive the fort was.

Many things have changed over the almost two centuries that a fort has existed on this site in eastern Wyoming, but what hasn’t changed is the beauty of the surrounding area and the feeling of history that surrounds visitors to the fort that welcomed so many emigrants.

Fort Laramie: Oasis on the Oregon Trail - Part One 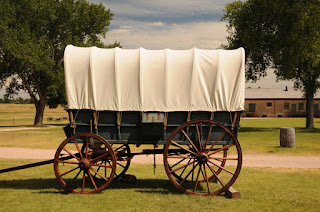 In the mid nineteenth century while the British ton were traveling along well-marked roads in comfortable coaches pulled by fine horseflesh they might have purchased at Tattersall’s, hundreds of thousands of Americans walked – yes, walked – thousands of miles in search of a better future. 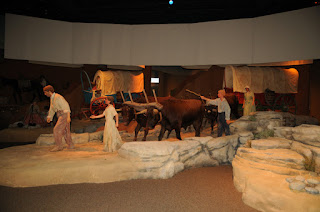 There were no well-sprung vehicles with velvet cushions to help absorb the roads’ bumps and few inns to offer them beds and hot meals. Instead, these pioneers loaded their belongings into Conestoga wagons, yoked sturdy oxen together to pull their canvas-covered temporary homes, and headed west. So many of them traveled the same route that the wagon wheels carved ruts as deep as five feet into the limestone hills. 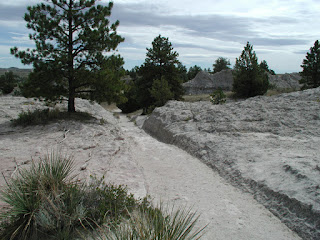 Some went to California, hoping to find a fortune in gold. Others were attracted by the promise of fertile land in Oregon. Still others fled religious persecution as they pulled handcarts toward the Great Salt Lake. Though their routes diverged soon after they reached what is now Wyoming, virtually every wagon train stopped at Fort Laramie. It was here that the pioneers rested their oxen, made necessary repairs to their wagons, and replenished their supplies at the post trader’s store. For, while crossing the plains had been arduous, the worst was yet to come. Mountainous terrain, the fear of Indian attacks, the threat of early snow, and the knowledge that there were few other places to purchase supplies made Fort Laramie seem like an oasis on the journey west. 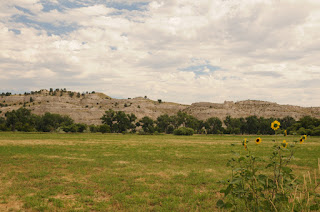 The fort that greeted travelers in the mid nineteenth century bore little resemblance to Hollywood’s idea of a western Army post. It lacked the wooden stockade and dilapidated wooden buildings that film makers have immortalized. In their place was a collection of buildings that might have reminded the pioneers of a New England town, but it wasn’t always so.

The first fort on the location, a trading post named Fort William, was relatively small and had a wooden palisade. While Hollywood might have liked it, it was destined for a very short life. When another fort was built nearby and threatened its status as a major fur trading post, Fort William was replaced by a new fort constructed on the same location. Fort John, as the new post was named, was made of adobe, was considerably larger than Fort William, and was able to compete with the nearby fort.

When the fur trade declined, Fort William’s existence might have been in jeopardy, but it gained a new lease on life as the first of the emigrant trains came through. Now, instead of serving as a center for trading buffalo hides, it became a major supply point for the wagon trains.

Then, as the number of emigrants swelled, so did fears for their safety. Responding to that need, the Army purchased Fort John in 1849 and renamed it Fort Laramie. Since the newly named fort would become a major military installation with both cavalry and infantry troops, it was time to expand the post and construct more buildings to house the men. 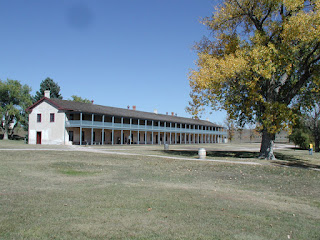 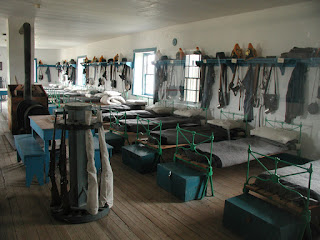 One of the most prominent landmarks was Old Bedlam, the two-story frame building that’s still in existence and that has the distinction of being the oldest military structure in Wyoming. Though its use changed several times, including serving as the post headquarters for a few years, it retained the nickname it gained during the early years of its existence when it served as bachelor officers’ housing. One can only guess what those officers did to warrant that name. 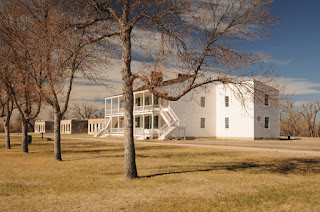 Close by Old Bedlam was the post trader’s store, more commonly referred to as the sutler’s store. It was here that travelers could find everything from teakettles to blankets to foodstuffs to basic medical supplies. The sutler’s store also housed the post office, an important stop for travelers starved for news from home. 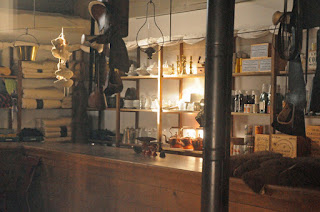 It’s no wonder that those hardy pioneers looked forward to reaching Fort Laramie.
To be continued ...
Posted by Amanda Cabot at 4:00 AM 2 comments: 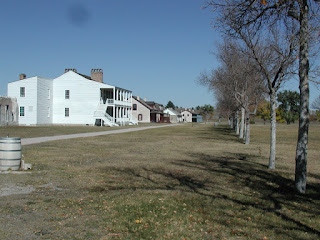 Rank has its privilege, and nowhere is that more apparent than on Officers' Row at Fort Laramie. Instead of living in barracks and subsisting on bread (no butter!) and coffee for supper, officers had relatively spacious quarters and better if not great food. 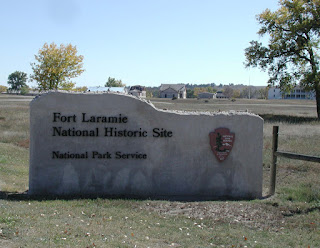 This month I'm celebrating one of my favorite spots in Wyoming: Fort Laramie National Historic Site.

My first visit there was an eye-opener. Instead of the quintessential western fort with a stockade and log cabin-style buildings, I found what could have been a well-established eastern town with stylish homes surrounding the parade ground.

It was so different and so intriguing that I knew one visit wouldn't be enough. And it wasn't!