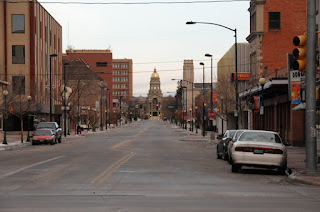 Where are we? This doesn't look like a picture of the depot, does it?

Actually, it was taken from the front of the Union Pacific depot, looking down Capitol Avenue toward the Wyoming State capitol. (What else would you expect to find on a street with that name?)

The buildings are very different in architectural style and building material, but they share the distinction of being two of the most important landmarks in Cheyenne, which is why in future months, I'll feature pictures of the interior of the capitol after its multi-year renovation. 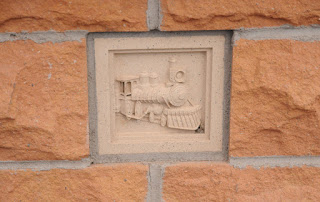 What's more fitting to decorate the exterior of a railroad depot than a stone with a bas relief of a train engine?

As you've probably guessed, since this month's posts have focused on Cheyenne's Union Pacific depot, that's where you'll find this stone.
Posted by Amanda Cabot at 6:00 AM No comments: 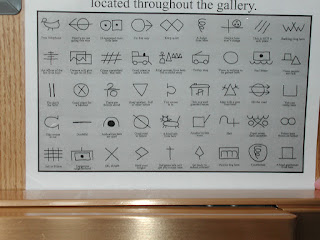 Last week, I mentioned that the Union Pacific depot now houses a museum. And it does. Part of the museum is located in the original depot building; the rest is in a recently constructed building that's attached to the western end of the depot itself.

With a combination of static exhibits and videos, the museum traces the history of both the depot itself and the railroad. So, what are those strange symbols and why are they in this post, you may be asking.

They're signs hobos used to help others who traveled along the rails, hiding in boxcars as they moved from one destination to another.
Posted by Amanda Cabot at 6:00 AM No comments:

Who cares about grammar?

Her and me thinks its important two no the rules of grammar, but sew few people dew.

Did you laugh when you read that last sentence? You were meant to. Although it's an extreme example, there's no doubt that grammatical rules are often broken, and -- since I'm a grammar purist -- that bothers me.

That's why I wrote a series of grammar-based blog posts for LA Sartor. I named them "Raves and Rants," although the rants far outnumbered the raves. If you're interested in my explanations of simple -- and not so simple -- grammatical rules, here's a link to them.

And, in case it wasn't totally clear, the second paragraph should have been: She and I think it's important to know the rules of grammar, but so few people do.

You knew that, didn't you?
Posted by Amanda Cabot at 6:30 AM No comments: 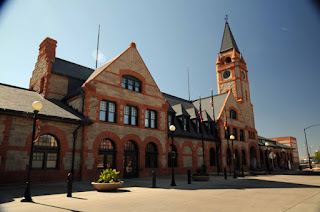 One thing visitors to Cheyenne can't miss is this, the Union Pacific depot. With its combination of red and white sandstone and its Richardsonian Romanesque architecture, it's one of the dominant landmarks in the city that owes its existence to the railroad.

This wasn't the first depot, however. The original one, a modest wooden structure, was deemed unsuitable as the city changed from a rough town sometimes called "Hell on Wheels" to the territory's capital, and so construction began on this decidedly more opulent building.

Even now, although Cheyenne no longer has any passenger train traffic and the building has been converted to a restaurant, visitor's center, and museum, the depot is still an important part of the city.

During the summer, concerts and a farmer's market take place in the square in front of the building, and an ice skating rink provides winter fun for many. And through every season, it's a beautiful reminder of Cheyenne's origins.
Posted by Amanda Cabot at 6:00 AM No comments:

Out of the Embers Countdown - ONE DAY 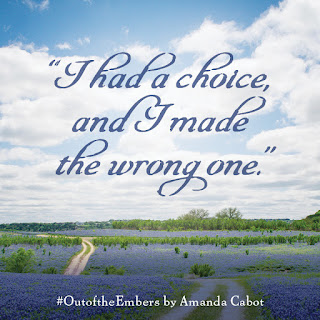 What was the choice Evelyn made and regretted? You'll find the answer in Out of the Embers, which releases tomorrow.

Yes, our countdown is complete. I hope you've enjoyed the quotes and learning a bit more about Evelyn and Wyatt's story. And if you read the book, I hope you'll agree with bestselling author Mary Connealy, who said, "I can't remember when I've enjoyed a book more."

For more information.
Posted by Amanda Cabot at 5:00 AM No comments: