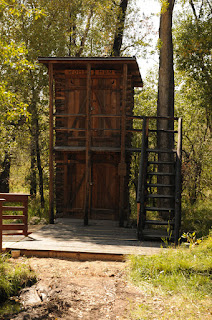 What is this?  A two-story outhouse.  I'd never seen them or even heard of them before reading about this one, but once I learned of its existence, I had to see it.  It's a replica of the ones used in the nineteenth and early twentieth century and is part of the Grand Encampment Museum in Encampment, Wyoming.

Why would anyone need a two-story outhouse?  Simple.  That part of the state gets so much snow that the lower half is submerged.  Rather than having to keep digging paths to the door, the enterprising workers simply added a second story for use during the winter months.  I, of course, would prefer indoor plumbing.
Posted by Amanda Cabot at 7:00 AM No comments: 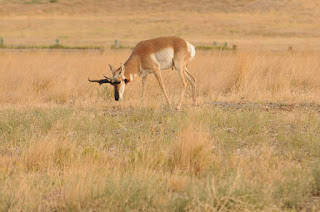 "Where the deer and the antelope play."  Every time I think about "Home on the Range," that's the line that lingers in my mind, probably because we have so  many antelope, or -- as they're more commonly called -- pronghorns, in Wyoming.  One of the things that impressed me about Wyoming on my first trips here was that there seemed to be at least as many pronghorns as people.  It's still true -- about half a million of each.

Now, for some pronghorn trivial.

That may be more than you wanted to know.  From my view, perhaps their most important characteristic is that they're beautiful animals. 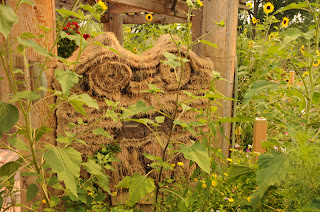 Do you know what this is?  I wouldn't be surprised if your first guess was not "a sod wall," since it doesn't look like the walls I associate with pioneers' sod houses.  But this is indeed a sod wall, even though it looks a lot like a face.  The reason it has such a whimsical shape is that it's part of the Children's Village at the Cheyenne Botanic Gardens.  Here's a back view, so you can see how it was constructed. 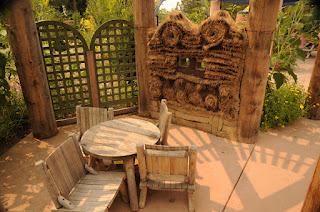 The Botanic Gardens are one of my favorite places in Cheyenne and a "must see" location for our visitors, in part because of creativity like this.  As I tell everyone, the Children's Village isn't just for kids.
Posted by Amanda Cabot at 7:00 AM No comments: 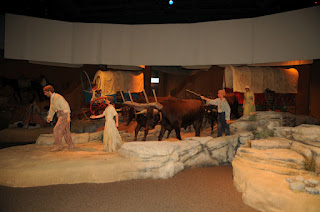 For anyone who's interested in the pioneers' journey west, the Historic Trails Museum in Casper is a must-see.  I've always been fascinated by the strength -- both physical and emotional -- that the early travelers must have had, and this museum only increased my admiration for them.  The first thing to see is this central room with its life-sized exhibits and a 19-minute movie that cleverly incorporated the wagons into it.  On a side note, you'll notice that the canvas tops of the wagons are no longer the milk white they were when they left Missouri.  The movie mentions the white-topped prairie schooners, but these show the results of weather and the inevitable dust.  Notice, too, that the travelers are walking, not riding.  Some even did it barefoot, which I cannot imagine.
Posted by Amanda Cabot at 7:00 AM No comments: