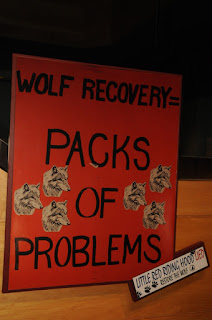 If you don't live in Wyoming, you may not have been aware of the controversy surrounding the reintroduction of wolves into Yellowstone National Park and the removal of wolves from the Endangered Species Act.

This exhibit  from the State Museum's 125 Years of Statehood exhibit gives you an idea of the two sides' opinions of wolves.  If you can't read the smaller sign, it says "Little Red Riding Hood Lied.  Restore the Wolf." 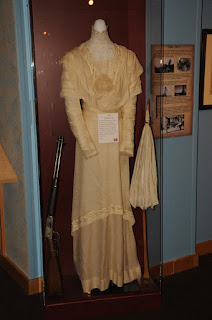 You've heard of shotgun weddings, haven't you?  Even though that wasn't the reason for this particular display, I couldn't help but smile when I saw the outlaw's shotgun next to a wedding dress.  Both are part of the State Museum's 125 years of Statehood exhibit. 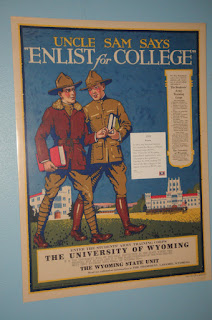 Today is Veteran's Day and the perfect time to include this picture from the Wyoming State Museum's 12 Years of Statehood exhibit.

On October 31, 1916 the University of Wyoming became one of the first colleges in the country to have a Reserve Officers Training Corps program, which they called The Students Army Training Corps. 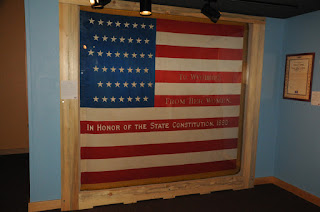 Did you know that Wyoming celebrated 25 years of statehood this year?  In honor of that milestone, the State Museum created an exhibit with artifacts from each of the decades of statehood.  This 44-star flag, which was presented to the governor by Esther Morris, commemorates both the fact that Wyoming was the forty-fourth state to join the Union and that women played an important role in the territory being approved for statehood.

In case you can't read it, the lettering on the red stripes reads, "To Wyoming, from her women, in honor of the State Constitution, 1890." 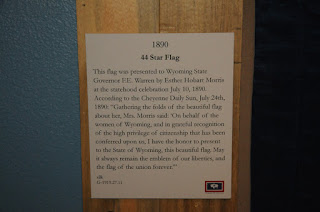