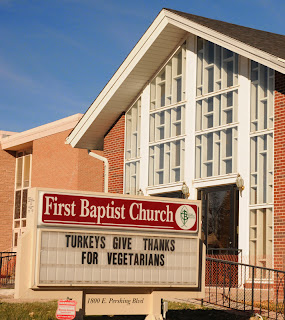 And I give thanks for all of you who've given me so much support. 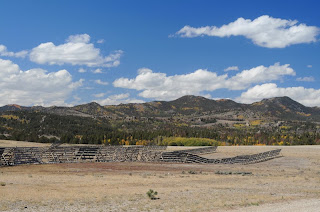 Unless you live in this part of the country, you probably haven't spent a lot of time thinking about snow fences, but they're a prominent part of the landscape along Wyoming highways.  As their name implies, they're critical for keeping snow where it will do the most good, namely on the prairie, and not on the highway.  In some areas, the snow fences are living fences, consisting of several rows of carefully planted trees, but what motorists see most often are the old-fashioned wooden ones like these.

The Wyoming Department of Transportation, better known as WYDOT, is responsible for the placement, construction and maintenance of snow fences, and it's a big job.  How big?  There are more than two million -- yes million! -- linear feet of snow fences in the state.  I don't know about you, but I was impressed with that number.

Did you ever wonder about the placement of the snow fences?  I hadn't, but it turns out that that's the responsibility of WYDOT's Winter Research Teams.  Those lucky employees get to travel the highways in the worst weather the state can offer -- think heavy snow and 40 mph or higher winds -- to see where the worst drifting is occurring.  I'm thankful that I'm a writer and not part of one of those teams!

So, tell me, are there snow fences where you live?  If not, what other weather-related things do you see along the highways? 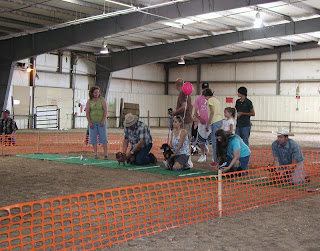 What is this?  A dachshund race.  It's part of the annual Dachshund Derby in Wheatland (Wyoming, of course).  Can you picture those short little legs running?  The truth is, some of the dogs were more than a little reluctant to run.  I can't blame them.

The races aren't the only part of the derby.  There's also a costume contest.  Don't you love this little guy's  hat? 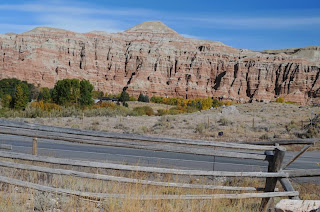 Did you know that although modern day Wyoming is a semi-arid state, it wasn't always that way?  Literally thousands of years ago, the area was covered by inland seas.  The proof is here in the various layers of rock that were deposited during those wet periods.  If you look closely, you can actually count the layers ... if you have enough time, that is.