We live in a world where a lot of communication is via text, tweets, and social media posts, all enhanced with emoticons. Things were different in the nineteenth century. Then, if people wanted to communicate, they did something  that might seem very old-fashioned: they talked.

That's one of the reasons why I had so much fun when blog hosts asked for interviews with the characters from A Tender Hope. 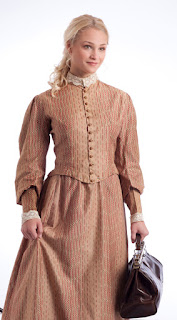 Let's start with Thea, the heroine. When she's cornered by one of the biggest busybodies in Cimarron Creek, the conversation becomes interesting.
Thea's Encounter with the Busybody

Jackson doesn't get away any easier. Silver, the owner of the town's one and only saloon, wants to know much more than he's willing to share.
Jackson's Uncomfortable Moments with Silver

And then there's Warner, the town's apothecary and a man who's known more than his share of heartbreak. He's convinced that he'll never marry, and as for being a matchmaker, well ... only one person has accused him of that.
Warner's Thoughts about Marriage and Matchmaking

I hope you enjoyed the insights into four of the most important characters in A Tender Hope. And, if you wondered what happened to Wednesday in Wyoming, those blog posts will return in June.