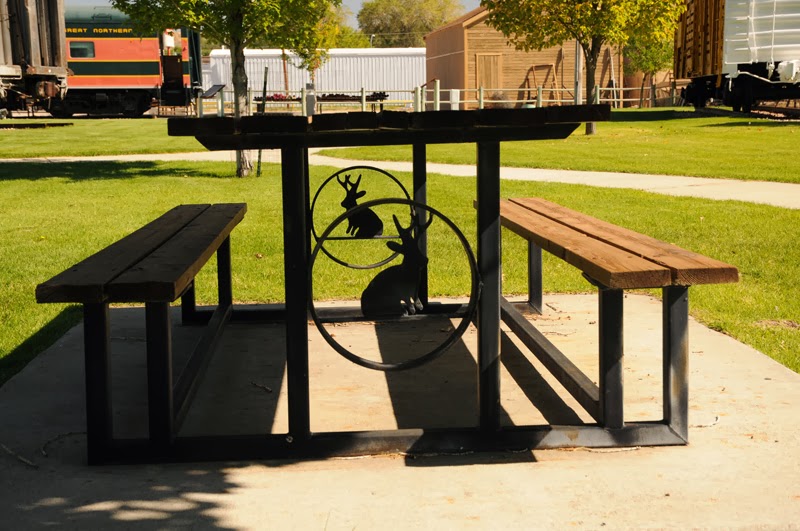 Last week we visited Thermopolis, which put its name on a sidewalk bench.  Douglas, the home of the mythical jackalope (a cross between a jackrabbit and an antelope), puts the town's emblem on many things, including the picnic tables near the visitor's center. 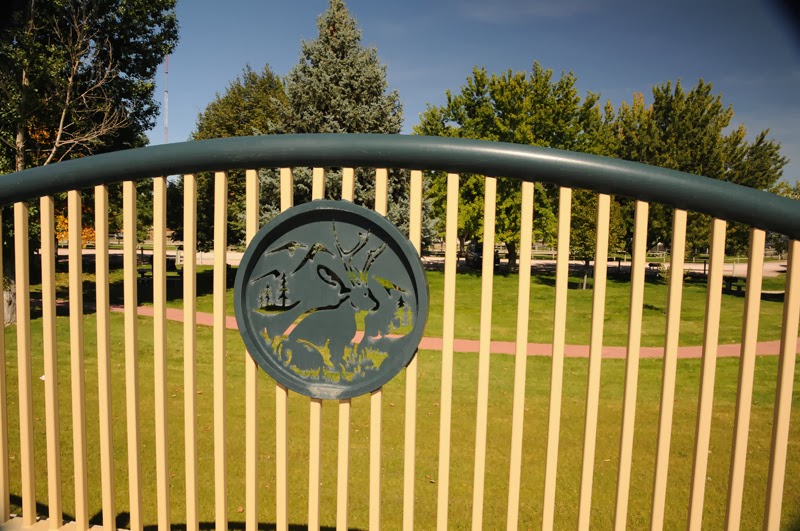 And on a bridge.  And, then, of course there are the larger than lifesize statues in various places around town.  Are you surprised to learn that the town's website is jackalope.org?

Did You Know? Carousel Trivia Part 3

Welcome back!  Today's our last day to talk about carousel trivia.  I thought we'd start with seating.

It's true.  There are some people who prefer not to climb onto a horse and ride astride.  That's why the carousel carvers invented chariots.  Basically fancy benches, chariots come in all styles imaginable.  This is one of my favorites, the lovers' chariot.  Believe it or not, this carousel is inside a shopping mall in Nyack, NY. 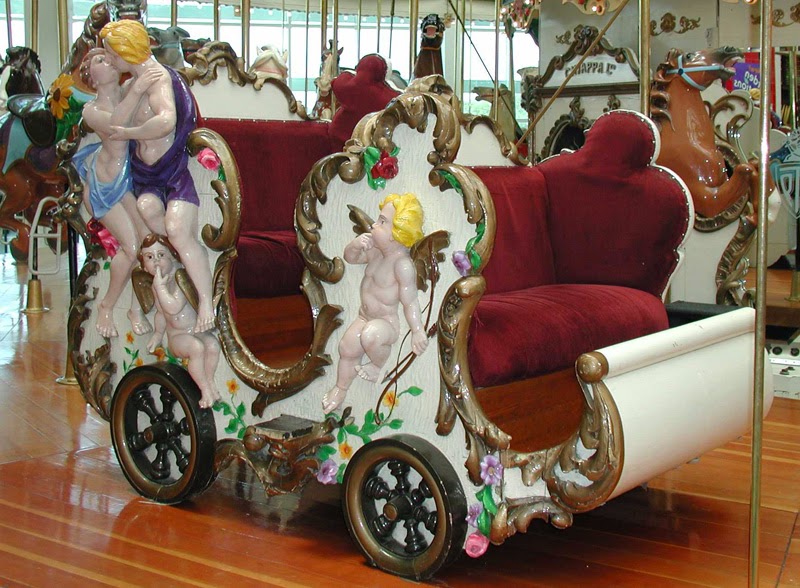 You can have a different kind of ride in a tub.  Although relatively rare now, these were popular with courting couples in the early twentieth century.  Why?  Because as the carousel revolved, so did the tub.  The centrifugal force drew riders closer together -- perfect for shy couples who had few other opportunities to touch without incurring criticism.   (My, how times have changed!) 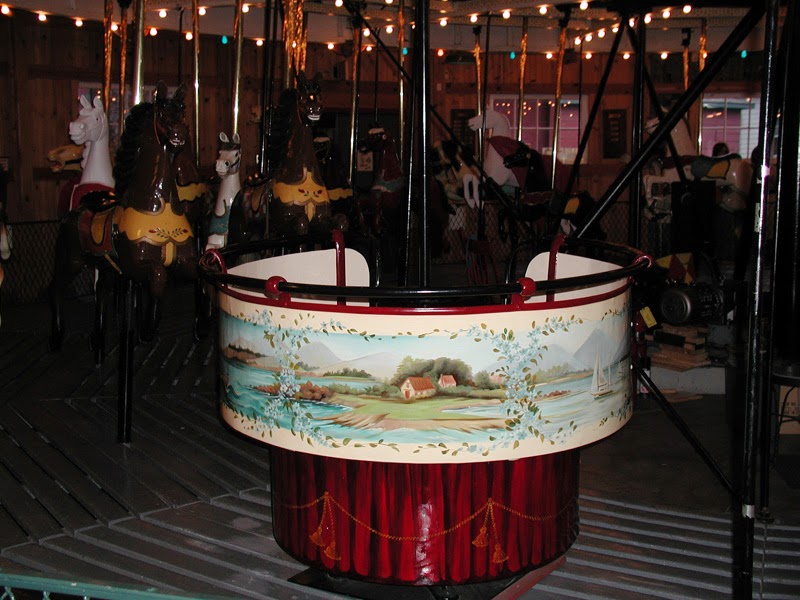 There's a wheel in the center that allows riders to control the speed at which the tub revolves. While it can't compare to a modern roller coaster, the tub was considered a fast ride in its era.

Most modern carousels include chariots to provide a variety of ride options.  The Carousel of Happiness in Nederland, CO goes one step further and has a space specifically designed for wheelchairs.  The ordinary chair can be easily removed, allowing a handicapped person to ride. 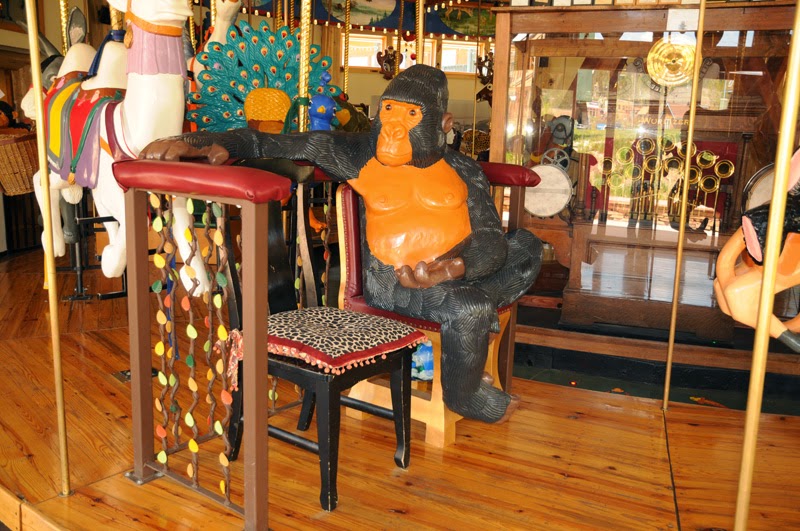 6.  Why don't I see many two-story carousels? 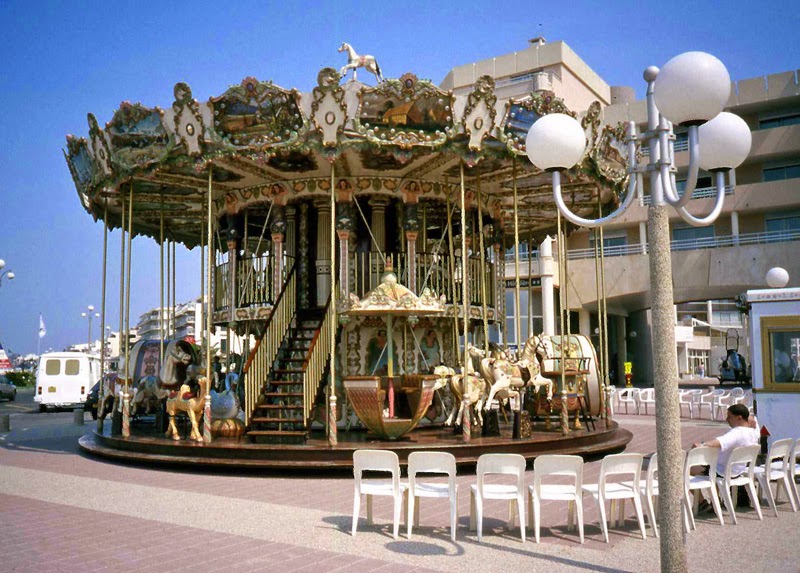 When I found this lovely carousel at a French resort along the Atlantic ocean, I was surprised to see that it had two stories and wondered why I had never seen a double-decker merry-go-round in the States.  Later, I saw the one below in Paris at the foot of Montmartre, and I had the same question.  It was time for some research. 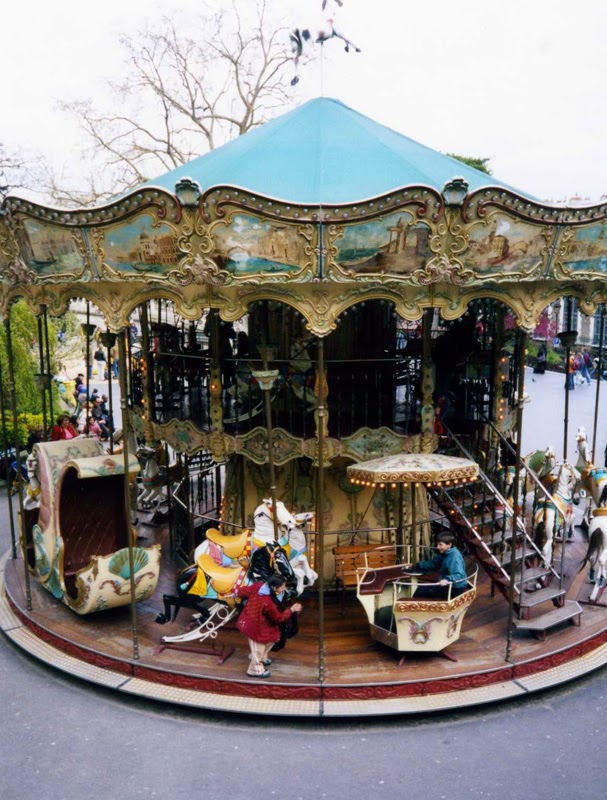 The answer, as you might have guessed, is money.  Oh, it's not that the two-story carousels cost more to construct, although of course they did.  The problem was that it took too long to load and unload the second story.  Even though there were more horses on the double-deckers, when the extra time was factored in, it turned out that fewer people were riding these each day than an ordinary one-story merry-go-round.  The ever practical carousel owners didn't want to sacrifice profits, and so double-deckers became very rare.

And now we've come to the end of our carousel trivia tour.  I hope you've enjoyed the ride and that I've intrigued you enough that you'll want to learn how carousels change Lorraine and Jonah's lives.  Their story, "One Little Word," is part of the Sincerely Yours novella collection. 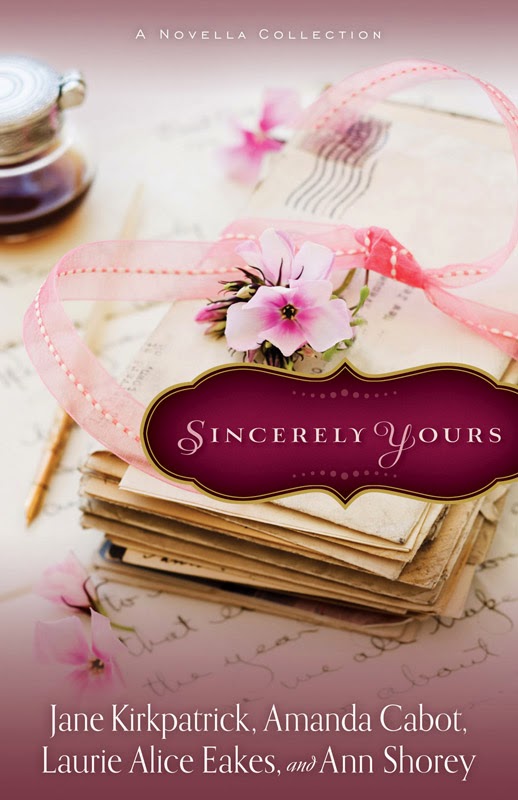 Did You Know? Carousel Trivia Part 2

Thanks for coming back for the second installment of carousel trivia.  Yesterday we talked about the design of carousel animals.  Today we'll discuss the actual construction.

3.  Is it true that the two sides of an animal are different?

Yes, it's true.  They even have different names.  The "romance" side is the one that faces the outside of the carousel.  As you might expect, it's the most elaborate side, since it's the one that's most obvious to riders. 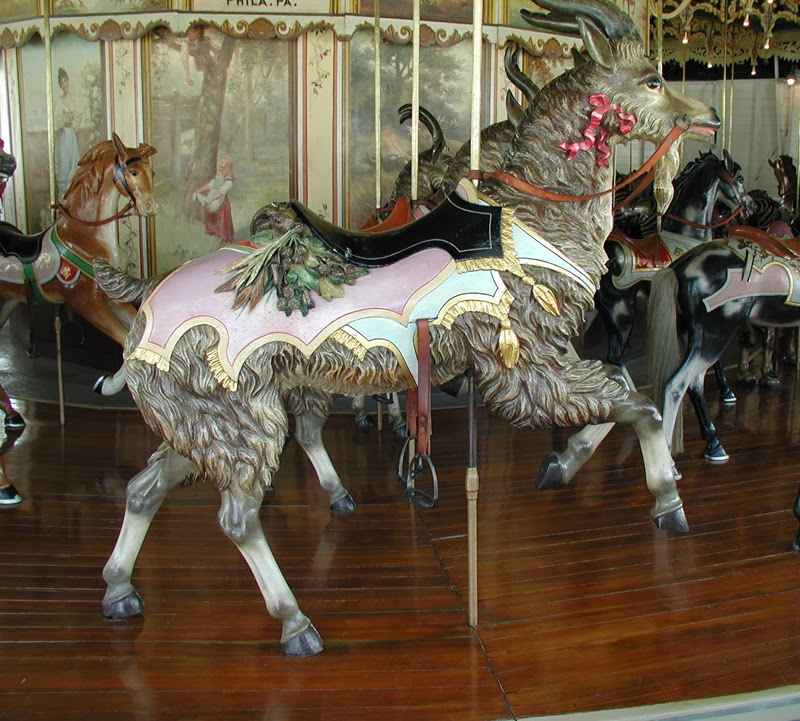 The designs on the romance side are intricately carved and painted -- lots of detail.

At first glance, the other side might appear identical to the romance side, but it isn't.  There's minimal carving on this side.  Instead, the details are simply painted, and some of them are omitted.  For example, look at the pink ribbon near the goat's head on the romance side.  It's nowhere to be seen on the inner side. Reducing the amount of carving and painting saves a lot of time and also means that less talented artists can work on that side.  That's why the inner side is called the "apprentice" side. 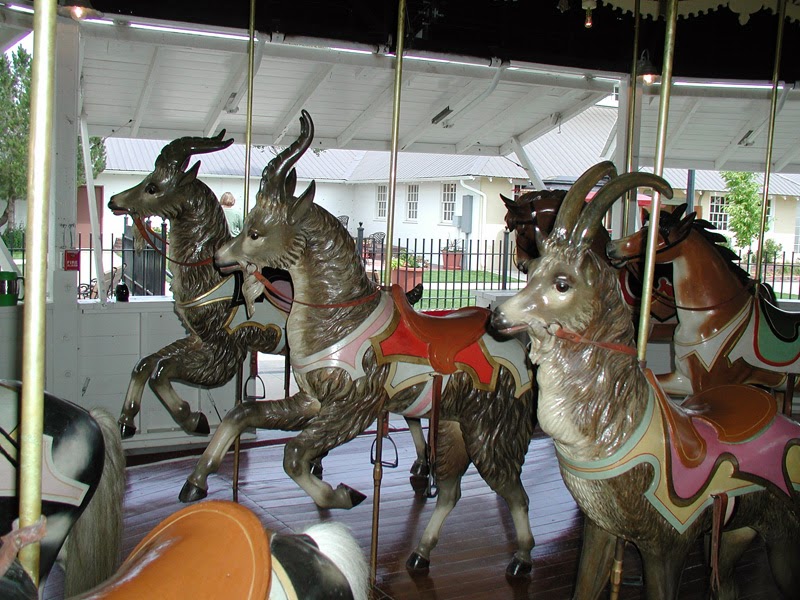 4.  Did you ever notice that each successive row has smaller animals?

The reason for this is that the carousel platform is circular, and as you approach the center, there's less and less space. 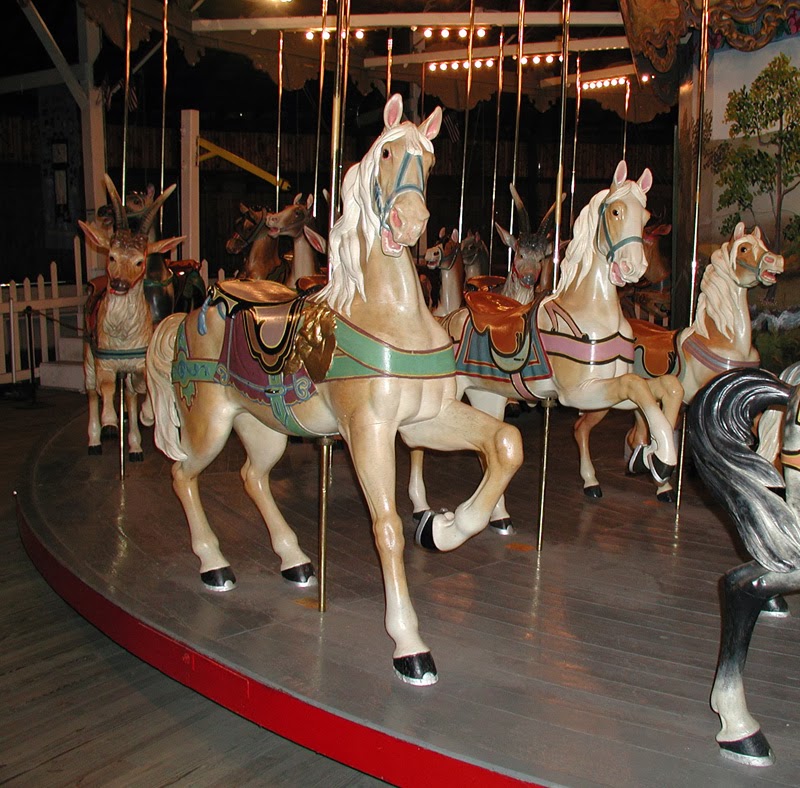 What may not be obvious is that the inner horses are also simpler in design.  Like the apprentice side of the outermost horse, these have fewer details, and many of those details are painted rather than carved.  Why?  Cost.  There's little reason to lavish a lot of time on the inner horses when they're not the focus of riders' attention.

We'll have our final installment of carousel trivia tomorrow.  But if you want to learn more or are curious about how my fictional carousel carver Jonah's  profession affects his relationship with Lorraine, an heiress who's in danger of losing her inheritance unless she marries the right man, here are buying links to Sincerely Yours.

Did You Know? Carousel Trivia Part 1

One of the pleasures of being a writer is doing research, and the research for "One Little Word," my novella in the Sincerely Yours collection, was particularly enjoyable.  I deliberately made my hero a carousel carver, because that gave me the excuse to visit a number of historic carousels and carousel-related museums.

Although I've included some carousel lore in the story itself, there were many more fascinating (at least to me) facts that I couldn't include, so I thought I'd share some of them with you in this and two more blogs.  I'm going to ask -- and answer -- a few questions.

1.  Did you know that there are three basic styles of carousel animals?

My favorite and the most elaborate is known as Coney Island.  Yes, as you probably guessed, the carvers who developed this style worked on New York's Coney Island. 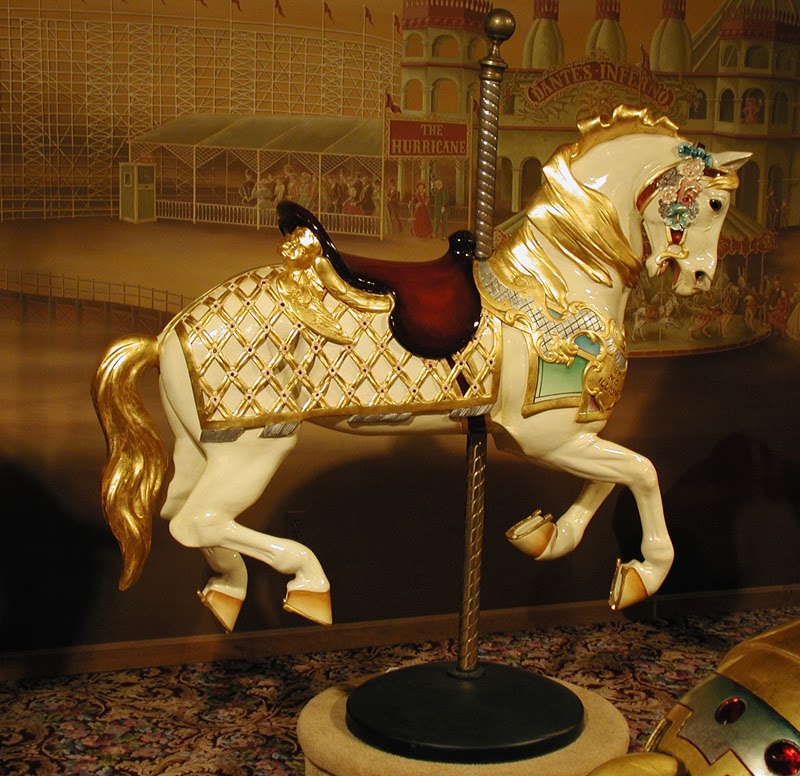 Coney Island horses feature gilding, jewels and, in general, a more fanciful design than the other two styles.  This particular horse was carved by Illions, considered by many (including me) to be one of the finest Coney Island carvers.

In contrast, the Philadelphia style is more realistic.  You won't see jewels or gold on these animals, because you wouldn't see that in nature.  Instead, these animals look like ones you might actually find on a farm or perhaps a racecourse.  Some even have real horse hair tails. 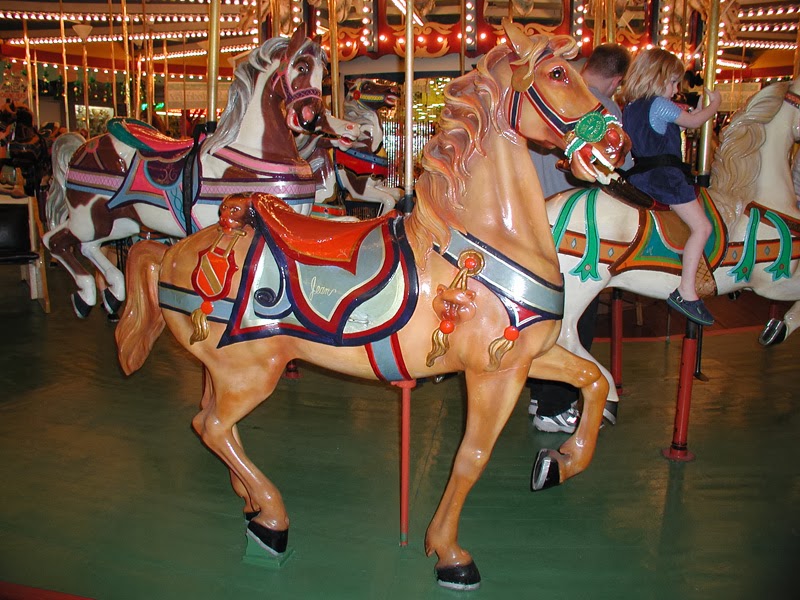 The third style is called County or Country Fair.  As the name implies, these horses were designed to be ridden at county fairs.  They tend to be simpler in design than either Coney Island or Philadelphia, largely because they were transported from place to place. 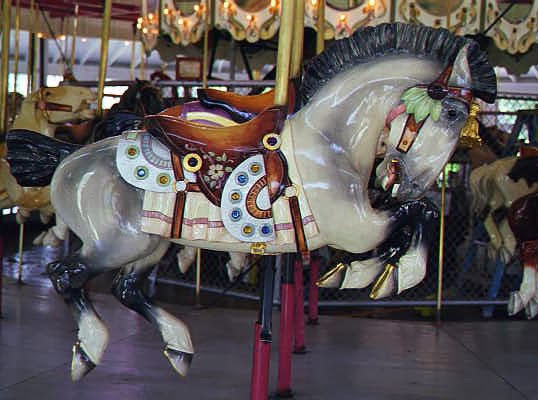 If you look closely at this horse, you'll see that his ears don't extend beyond the top of his mane, and that his legs are shorter and sturdier than either Coney Island or Philadelphia style horses'.  All this is for practical reasons.  Long, slender legs might be beautiful, but they were far more likely to be broken when they were loaded into and out of wagons.

Although my dictionary has a number of definitions, in carousel terms, a menagerie is simply one that has animals other than horses. 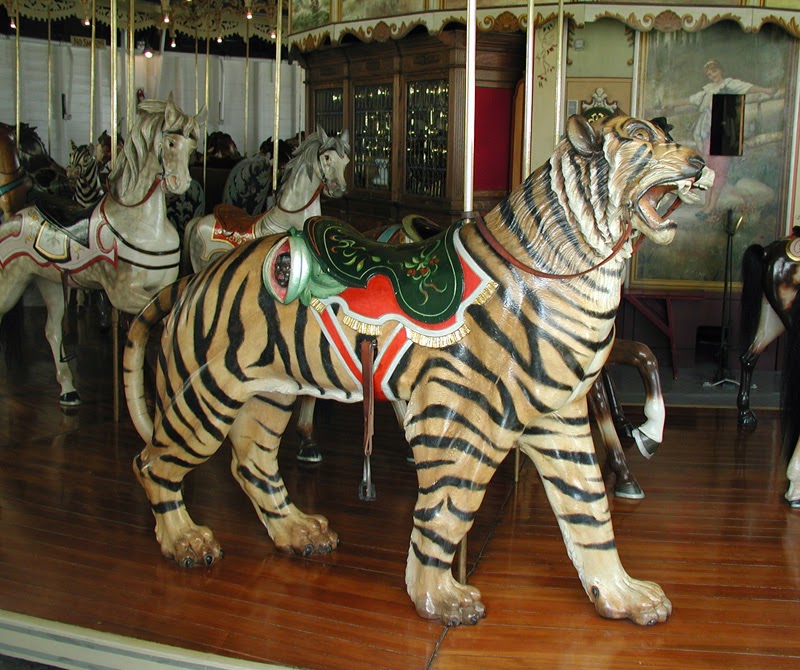 The first carousels featured only horses, but as carvers sought new challenges and the carousel owners sought new ways to attract riders, carvers expanded their repertoire.

There'll be more trivia tomorrow.  In the meantime, if you're intrigued by the idea of a carousel carver as a hero, here are buying links to Sincerely Yours.  You'll find four novellas in the book, each featuring a different era in American history.  The other stories were written by Jane Kirkpatrick, Ann Shorey and Laurie Alice Eakes.  If you've read any of their books, you know what wonderful storytellers they are.  And if you haven't read them, here's a chance to sample their work. 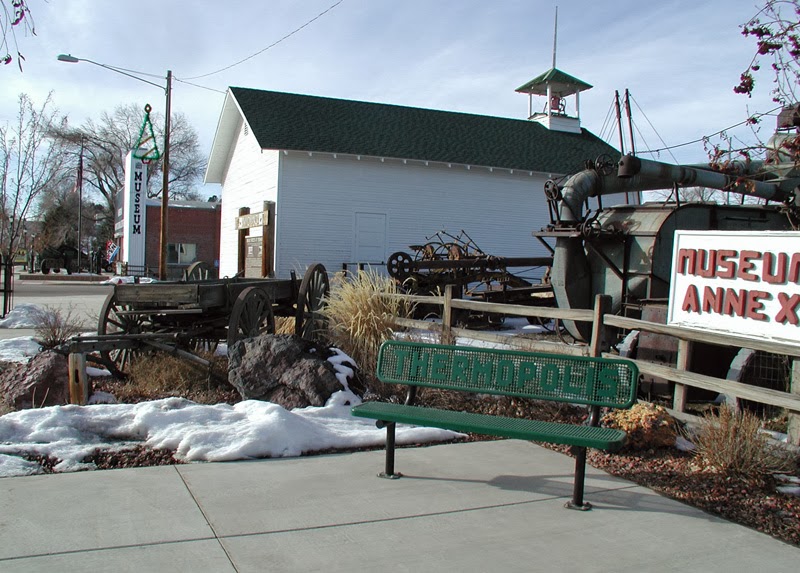 Thermopolis, home of the world's largest hot springs, is also a town that advertises itself on its sidewalk benches.  Here's a second picture so you can read the town's name. 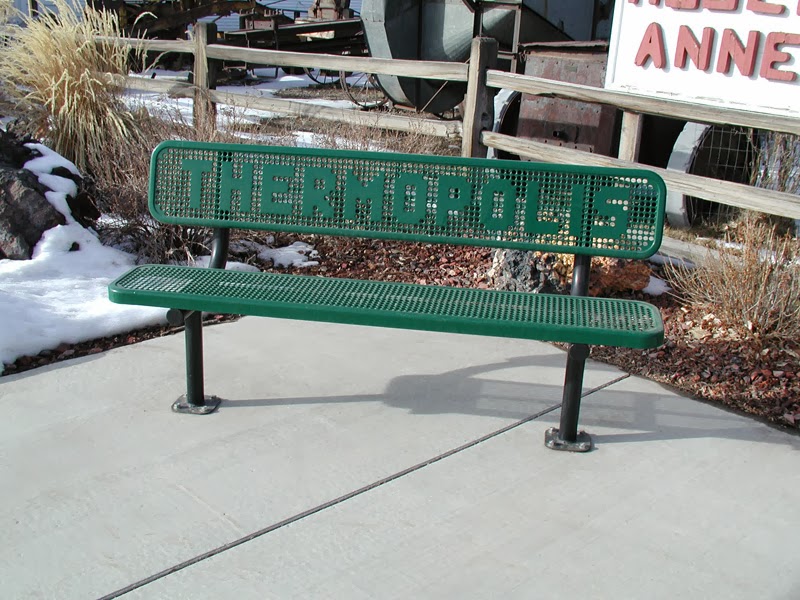 As if that weren't enough,the town has its own version of Monopoly (called Thermopoly, of course) and is home to the state bison herd.  A fun place to visit!


Posted by Amanda Cabot at 7:00 AM No comments: 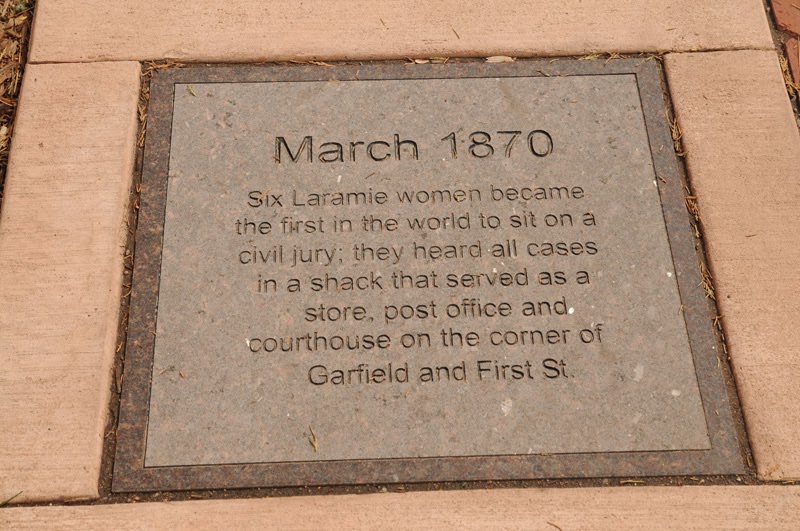 This is one of those "firsts" that Wyoming is justifiably proud to report: the fact that it was the first in the world to allow women to sit on a civil jury.  I find it amazing to realize that 145 years ago, women weren't allowed to be jurors.  I find it a sad commentary that now many people -- both men and women -- do their best to avoid jury duty.  As the judge told us when I was called to jury duty last summer, it's both a responsibility and a privilege to serve as a juror.

(In case you were wondering, this sign is embedded in a small park in Laramie.) 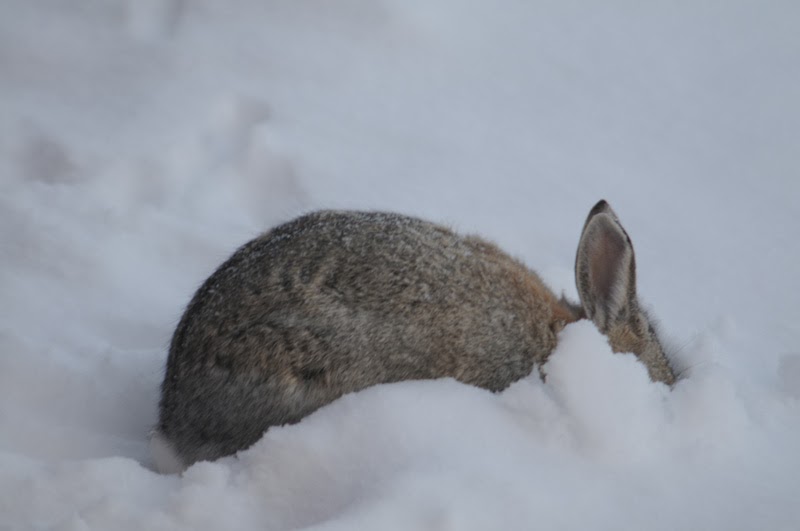 It's definitely winter in Wyoming, as this poor cottontail rabbit knows all too well.  What's it doing?  Foraging for food. 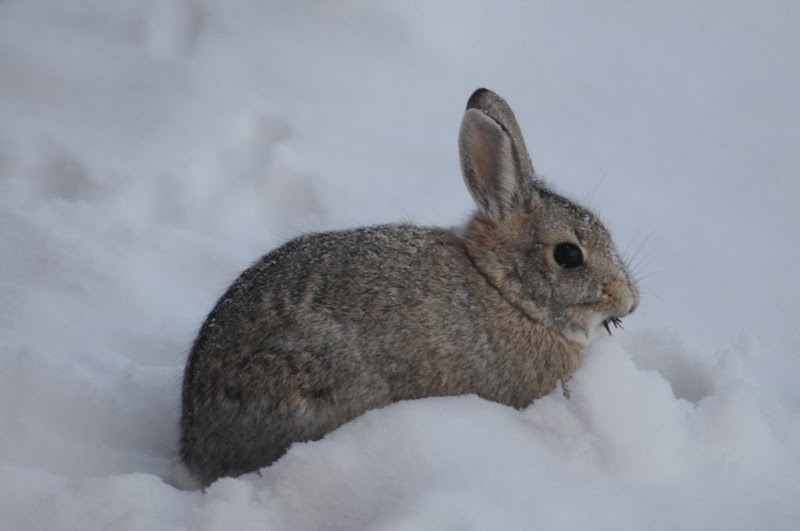 If you look closely, you'll see some dried grass in its mouth.  I have to admit that I'm much happier when the cottontails eat the grass than when they snack on my newly sprouted crocuses.  Still, it's fun to watch the little critters, even when they're being just a bit destructive.