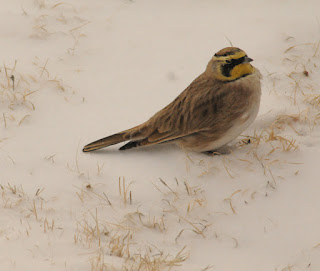 I'm ending the month with what I call the Mystery Bird.  It appeared in the yard in mid-December and stayed long enough for a photo shoot, but -- despite hours spent with my Audubon Field Guide -- I could not identify it.  Neither could my neighbor, who's an avid birder.

Do you know who the mysterious visitor was?
Posted by Amanda Cabot at 6:00 AM 3 comments:

Today's post is going to be longer than normal, because I want to show you three Horned Lark chicks from hatching to fledgling.

Did you know that Horned Larks build their nests on the ground? That would seem to make them susceptible to being trampled by cattle or humans, but somehow they survive. 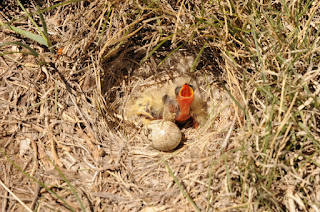 As you can see, their camouflage is excellent. If it weren't for the bright orange throat of a hungry chick demanding food, you might not even notice the nest, particularly since the egg looks very much like a rock.

At this point, the nest doesn't appear too crowded, but that's because all the chicks haven't yet hatched. 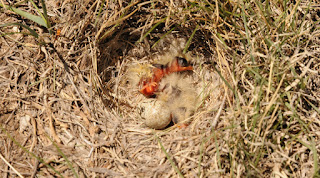 Here's the second chick, just hatched. If you look closely, you can see the eldest chick with its head next to the unhatched egg and its yellow down quite visible. 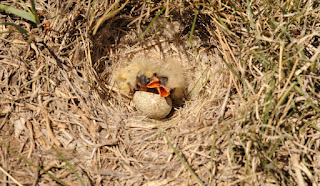 What are these two siblings doing? My guess is that they're waiting for the third egg to hatch. Note that their beaks are open, probably in search of food. 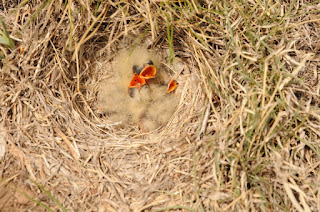 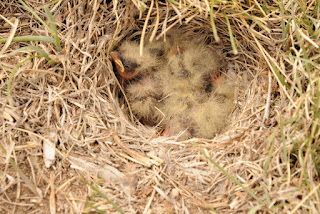 The nest is getting crowded now, but the triplets aren't ready to leave. Did you notice that you can see darker feathers beginning to emerge under the yellow down? I'm amazed that their beaks are closed. 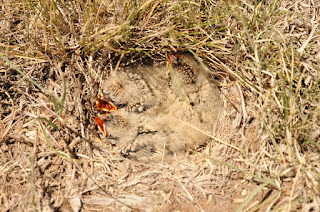 Here they are, beginning to look more like birds than chicks and almost ready to leave the nest. Good thing, since the nest is now very crowded.

Once they leave the nest, I see them perched on fence posts and hear their song, and then the cycle begins again.
Posted by Amanda Cabot at 6:00 AM No comments: 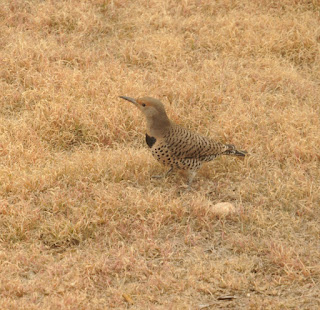 I was fascinated when this bird appeared, since I'd never seen one with such a pronounced chest patch.  It turns out that it's a Northern Flicker, part of the woodpecker family.
Posted by Amanda Cabot at 6:00 AM No comments: 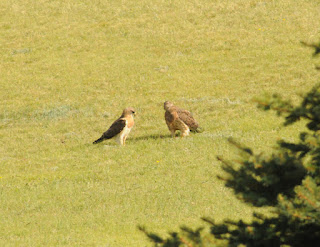 What are this pair of hawks doing?  Dining!  At first the younger one appeared content to watch its parent, but soon the lure of fresh meat took over. 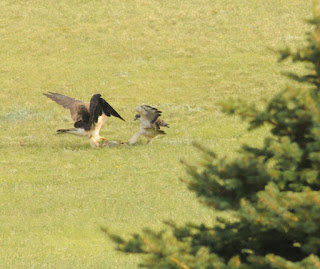 As you can see, there was a bit of a struggle.  You can guess who won.

The next morning, the youngster returned to the same site, as if expecting food to have been delivered there.  It wasn't.

I believe these are Swainson's hawks, which are common here, but I'm not 100% certain.  Can you confirm that?
Posted by Amanda Cabot at 6:00 AM No comments: 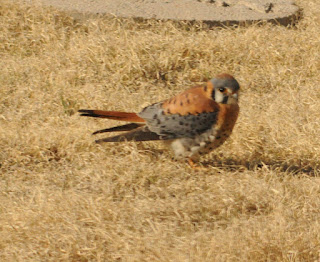 This month I'm going to feature some of the birds that have visited (or even taken up residence) in my yard.

Do you recognize this one?  It spent a lot of time on the birdbath, then hopped to the ground and stayed there for the better part of an hour one morning, which gave me plenty of time to pull out my trusty Audubon Field Guide and identify it.

This is -- drum roll, please -- an American Kestrel, a member of the falcon family.
Posted by Amanda Cabot at 6:00 AM No comments: