Words for Writers - Maps and the Writer 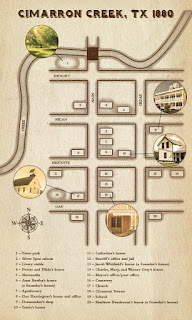 I think most of us would agree that maps – whether the old-fashioned, hard-to-fold paper ones or the electronic versions provided by GPS systems – are invaluable tools for getting from Point A to Point B, but I wonder how many authors have considered maps a part of the writing process.

I’ll admit it. From childhood on, I’ve been fascinated by maps, especially by street maps of cities, but it was only when I started writing that I realized just how valuable they could be for an author.

Science fiction and fantasy writers talk a lot about world building, but those of us who write about the world as it is, or as it was in a specific point in history, need to do our share of world building, too. We need to create settings that ring true to our readers. That’s where maps come in. Knowing the relative positions of two country estates or the street names in a city, whether real or fictional, helps add the authenticity that readers crave.

Whether the city is real, as in my stories set in Cheyenne, or fictional like the town of Ladreville that’s the center of my Texas Dreams books, I have a map spread out in front of me while I write. That map’s as important to me as my chapter-by-chapter outline. When I create a map, I begin with street names, landmarks, topography and orientation. Street names and landmarks are self-explanatory. By topography, I mean the presence of hills, forests, rivers or other natural features that might play into the story. Orientation refers to the direction on the compass. Does the main street run north-south? Which direction does the town hall face?

Once I have that information, I pencil in the location of my characters’ homes as well as the public buildings that play a role in the story. If I’m working with a real city like Cheyenne, I sandwich my characters’ homes and business establishments between actual buildings from the time period. It’s only when I have all the locations established that I start to write.

Why would I or any other writer do this? I view it as a form of research, a case of knowing as much as I can about my characters’ lives before I begin to tell their stories. But it’s more than that. Having a good map is important for three reasons.

1. It increases the book’s accuracy. If you know the compass orientation of the street where your characters are staying and you’re describing the shadows a tree casts at 3 PM, you’ll know which direction those shadows are falling. You’ll also know whether your heroine would see a sunrise from her kitchen window.

2. A map assures consistency. Readers are astute. If your character turns right one time to go from his house to the church but heads left the next time, your reader will notice the discrepancy. It may not stop her from reading the rest of the story, but it will brand you as a sloppy writer. Who needs that?

3. A map allows you to add the details that bring your fictional world to life. Once you’ve created your map, you can calculate the distance between points and can determine how long it will take to travel that distance. You can mention landmarks along the way. And, of course, since you have the map, those details will be accurate and consistent.

Have I convinced you? Then let me add another element: floor plans. Although I’m far from an architect and my scribbles are primitive, I create floor plans of my protagonists’ homes, because – like maps – they allow me to be accurate and consistent in my descriptions.

If the hero’s house faces the river that flows north-south, he will not be able to see the blazing ball of a setting sun from the same window where he studies the river. If the heroine’s bedroom is on the second floor of a two-story house, she will not hear footsteps above her, but the closing of the front door might be audible if her room were on the front of the house.

To me, maps are a key part of the writer’s toolbox. I love them, and that’s one reason I’m delighted that Revell has included maps at the beginning of many of my books. If you haven’t already done it, I hope you’ll consider creating a map for your next story. It can be a truly useful tool.

Labels: maps and the writer, Words for Writers