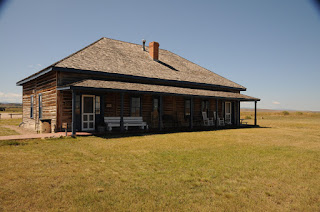 Remember the officer's quarters in last week's post about Fort Fetterman? They're located in this restored duplex, which is now the fort's primary museum. (A former ordnance building houses the second museum.)

One of the most interesting aspects of this building, at least for me, was its modular construction. If you look at the following picture, you can see that there are four distinct sections to the building. 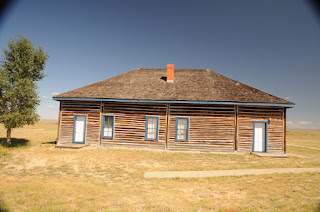 Another thing to note is that, while this is a duplex, the two halves are not identical. The one on the left has an extra window, suggesting that it would be assigned to a more senior officer.

Rank was extremely important in that era, particularly where housing was concerned. When a new officer was assigned to the fort, he was given the housing his rank merited, displacing the current lower-ranking occupant, who then displaced someone else. It was the military version of musical chairs.