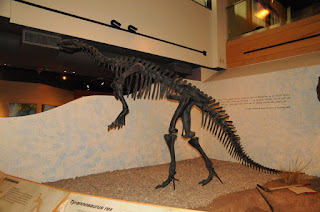 One of the largest exhibits in the Wyoming State Museum is this replica of a Tyrannosaurus rex skeleton. If you were wondering why it's there and so prominent, it's because Wyoming is noted for its fossils, including those of dinosaurs.

The quotation on the back wall says, "There is no square on earth as rich as Wyoming in its fossil forms of extinct life. From the Permian ... to modern annals, nearly all of the life that ever lived upon the earth can be found within the limits of the state. -- Curator William H. Reed, University of Wyoming, 1899"

Who knew that the Equality State was also a treasure trove for fossil hunters?
Posted by Amanda Cabot at 6:00 AM