The Story Behind the Cover -- With Autumn's Return 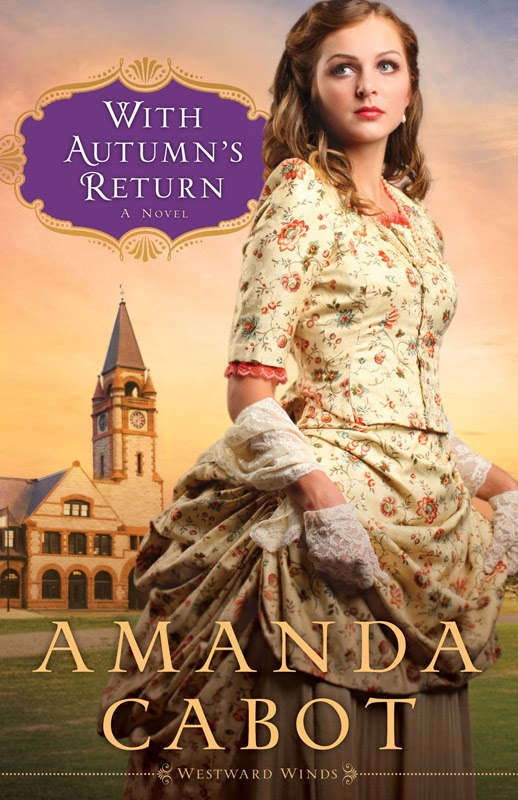 This is my seventh book for Revell, so you'd think I'd be used to having wonderful covers, but I still get excited by each one, and I'm still fascinated by the process.

As you can see, once again, Cheryl VanAndel, Revell's Art Director, has given me a fabulous cover.  What you may not know is how that cover was developed.

The first step was to choose the model.  It took two tries and an extensive search for an appropriate wardrobe, but Cheryl finally found the perfect woman to portray Elizabeth.  Once the model was chosen, she gave me a choice of several different gowns, including this one. 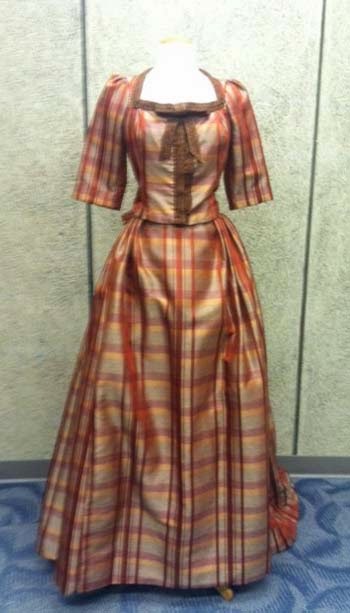 Plaid was definitely correct historically, but I wasn't thrilled with it.  On to the next choice. 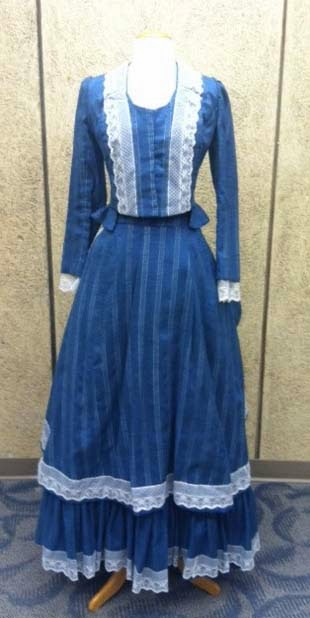 Pretty, but the cover of Waiting for Spring had a blue dress.  The color could have been changed with Photoshop, but the style was also similar to the one on Spring.  And that brought us to this one: 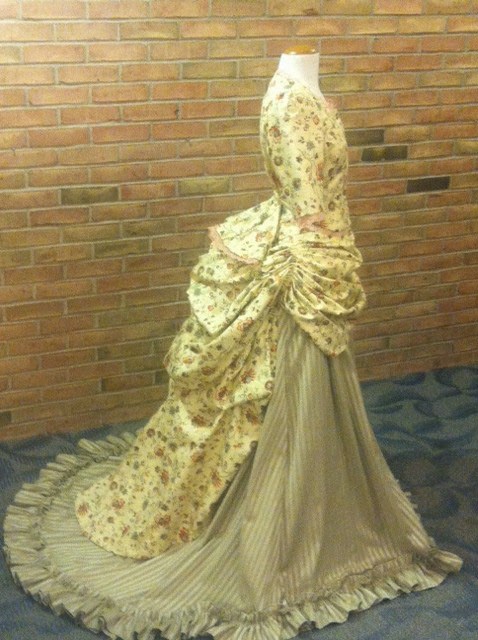 To be candid, although I liked the style, I wasn't sure about the print.  Fortunately, I'm not the Art Director.  Cheryl saw the possibilities in this one and told me she thought it was the best of the three.  She was right.  (She's always right!)

Once the gown was selected, it was time for the photo shoot.  Out of all the pictures, Cheryl selected two and asked for my opinion. 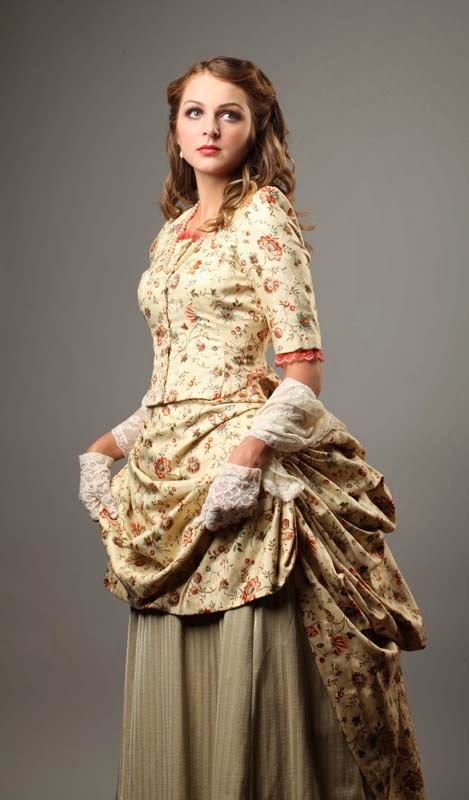 We both preferred this one.  One of the reasons I liked it was that it minimizes the bustle.  Let's be honest: bustles aren't the most flattering garments.  I also liked the shawl and the lace gloves, since a lady of that era wouldn't have gone outside without gloves.

This, as you can see, became the photo for the cover.  You'll notice that it was flipped so that the model had a pose similar to those on the previous two Westward Winds covers.

Next came the background.  As was true for the other two Westward Winds books, Cheryl used one of my husband's photographs.  I was delighted!  In case you were wondering, the building is the Union Pacific Railroad depot, which was completed at the time With Autumn's Return takes place.  It's still a major landmark in Cheyenne, although the city no longer has passenger rail traffic.  Thanks to talented artists and Photoshop, the modern elements like the tables and planters, were replaced with more historically correct grass. 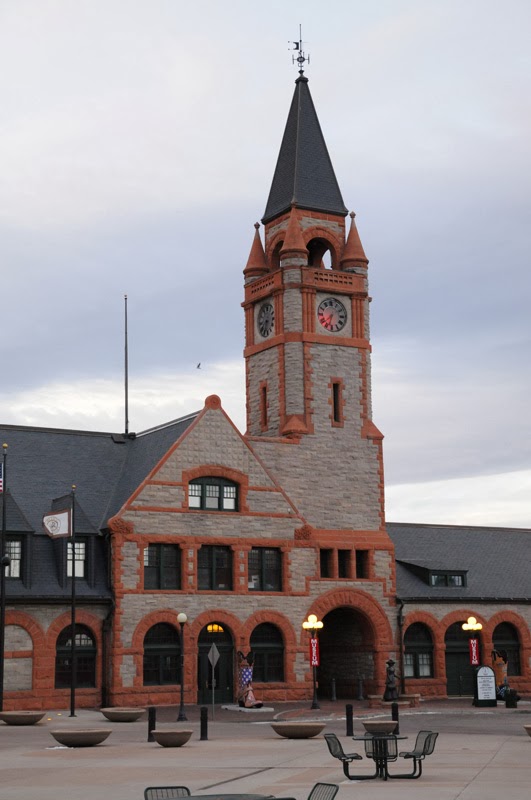 You may recall that I said Cheryl liked two poses from the photo shoot.  Here's the second, the one with the prominent bustle. 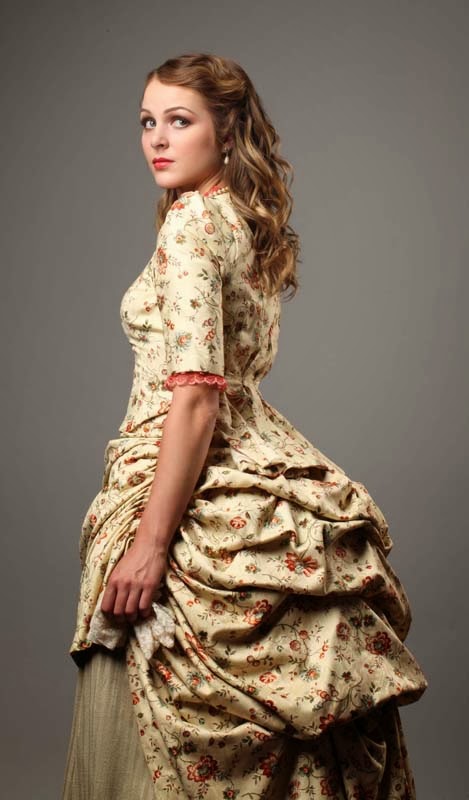 It was so good that rather than simply discard it, Cheryl used it on the book's spine, once again flipping it.  This was the first time I've had a different pose on the spine.  It may not seem like a big deal to you, but I was excited about that.

After that came back cover design and writing the copy that helps readers decide they want to buy this particular book.  Erin Bartels, who is herself a published author, is the person behind the back cover copy.  It always amazes me how Erin can condense a very long story into just a few paragraphs and intrigue readers without giving away too much of the plot.  She's a master at it!

The whole process took months, but at last we had a finished cover.  I hope you agree with me that it's a winner. 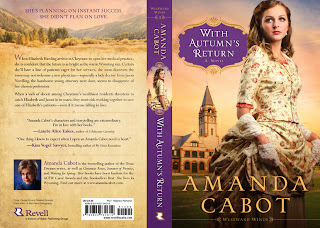 I thank Cheryl, Erin and everyone else at Revell who was involved in giving me another wonderful cover.